When To Take Writing Advice 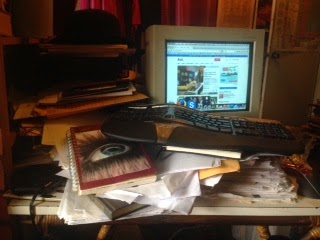 This is for all the gonnabe writers out there.  It's possible I've said this before but if I have, it bears saying again.

There are writers who cannot begin a story until they know every twist and turn of its plot.  Then there are others who write in order to discover the ending.  Once they know how it all winds up, they stop writing -- even if it's before they've put the first word down on paper.  And I could go on and on.  Obviously, the same advice is not going to work for Franz Kafka and P. G. Wodehouse both.

So how can you tell what advice works for you?  You try it out.  If it works, you pat yourself on the back for having learned something today and place it carefully in your conceptual toolbox.  If it doesn't, you leave it where you found it without guilt or rancor.  It's just that simple.

Except, of course, when it's not.


Above:  This is what a writer's desk looks like.  Unless it doesn't.

Does your caption refer to the table with the so-last-century CRT on it, or the desk in the image on that screen, with the person typing?

Hi Michael. I came across your work after reading Michael Moorcock's high praise for The Dragons of Babel, and have also more recently read Passage of Earth, which I found to be as imaginative as it is disquieting. I wonder, as I'm struggling at the moment to produce anything of even the remotest quality; receiving rejections from the likes of Clarkesworld, Apex and Interzone -- how you cope with the bleak periods in between working; with lack or loss of inspiration, or a dulling of the mind -- that is, if you do so at all?

Also, do you find it disheartening when, for instance, you post to your blog and you receive no comments?