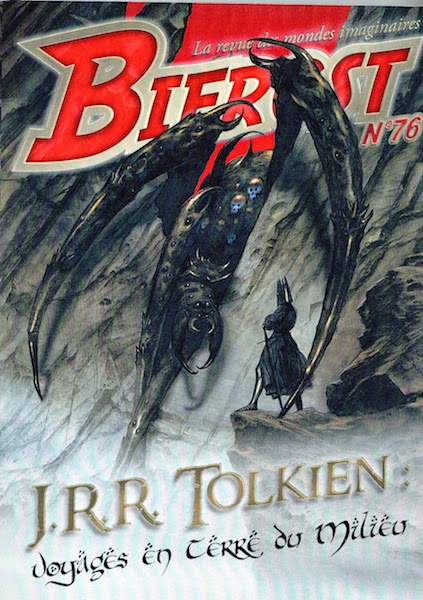 The only downside to having a story reprinted in Bifrost, the French magazine of fantasy and science fiction, is that when my contributor's copy arrives, I must bitterly regret having never managed to learn to read French.  What a lovely magazine!  Well made, generously illustrated, and crammed with reviews, essays, interviews -- and fiction, of course.  Were I not illiterate in all languages but one, I'd spend a very pleasant afternoon with with it.

The latest Bifrost is a special J. R. R. Tolkien: Voyages in Middle Earth theme issue, and it contains my own "The Changeling's Tale."  It's about . . . well, why don't I quote something I wrote earlier?  In an essay entitled "A Changeling Returns to Middle-earth," which was a summation of everything I knew and thought and felt about Tolkien's great work, I wrote:

Decades later, I wrote a story in homage to Tolkien, called “The Changeling’s Tale.”  In it, a young tavern boy is swept up by a troupe of passing elves and carried away from hearth and home and all he knows and cares about.  He pays a heavy price for the going, but he goes out of love for their beauty, their grace, and their strangeness, into a future of which all he can know is that it’s beyond his imagining.  It was an honest story, I hope.  But it also carried an autobiographical weight.  Will Taverner was as close as I will ever come to a self-portrait.  His story is not that different from mine.  Long ago, I ran away with the elves, and I never came back.

So now Will has made it all the way to France, a country I have never seen -- though I'm sure I'll visit it someday, to retrace the footsteps of Hope Mirrlees in Paris, if for no other reason.  I wish the lad luck.  It takes courage and bad judgment to run away with the elves, and I for one have never once regretted doing so.

Michael, I hope if you ever get to Paris you will invest in a copy of Hemingway's A MOVEABLE FEAST and try to walk the route Hemingway would walk from the ratty apartment he and his first wife lived in on (or near) the Place Contrescarpe down to the "good cafe" on the Place St.-Michel where he would write and saw the girl "with a face fresh as a newly minted coin". I have to bet that dozens of both would-be and seasoned writers have walked that route by now. I must admit that I never liked the way he treated his wives or most of his work, but I greatly respect what he was trying to do. I can't help wondering what kind of science fiction could have written. Stuff 50% Murray Leinster/50% Cordwainer Smith?? P.S.: I love "Big Two-Hearted River" and lots of A MOVEABLE FEAST, although I've been told a lot of it is very slanted.

I think I want a t-shirt with "It takes courage and bad judgment to run away with the elves" printed on it.