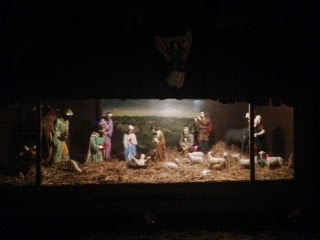 Merry Christmas, everyone!  This is one of my favorite times of the year.  And, that being so, it's time to present my annual re-telling of something that really did happen, exactly as I tell it here.  Ladies and gentlemen, I give to you...

When first I came to Roxborough, a third of a century ago, the creche was already a tradition of long standing.  Every year it appeared in Gorgas Park during the Christmas season.  It wasn't all that big -- maybe seven feet high at its tip -- and it wasn't very fancy.  The figures of Joseph and Mary, the Christ child, and the animals were a couple of feet high at best, and there were sheets of Plexiglas over the front of the wooden construction to keep people from walking off with them.  But there was a painted backdrop of the hills of Bethlehem at night, the floor was strewn was real straw, and it was genuinely loved.

People were upset of course.  Nobody liked seeing a beloved tradition disappear.  There was a certain amount of grumbling and disgruntlement.

But did this make us happy?  It did not.   The creche was just not the same, located in front of a church.  It seemed lessened, in some strange way, made into a prop for the Presbyterians.  You didn’t see people standing before it anymore.


And I've received the first review of my next novel . . .


On the one hand, it's immodest of me to pass along praise.  On the other hand, I do have an obligation to do what little I can to promote my own fiction.  (If I don't, who will?)  So...

Tor, the publishers of my next novel, Chasing the Phoenix, in which my post-Utopian con men Darger and Surplus accidentally conquer China (these things happen), has sent out advance reading copies to select writers, hoping for blurbs.  One of them was Michael Flynn, who liked it greatly.  On his blog he wrote:

The dialogue is entertaining, the plot twists clever and supple, the narrative voice perfectly tuned, and the whole story suffused with sly Swanwickian humor.


This is, I confess, exactly the sort of response I was hoping to evoke in the reader.  Which doesn't, however, diminish the pleasure of reading such words, particularly when they come from a writer I respect.


Above:  That's the creche itself, as of last night.  A lovely thing, really.  Especially at night.