A Candle From Space 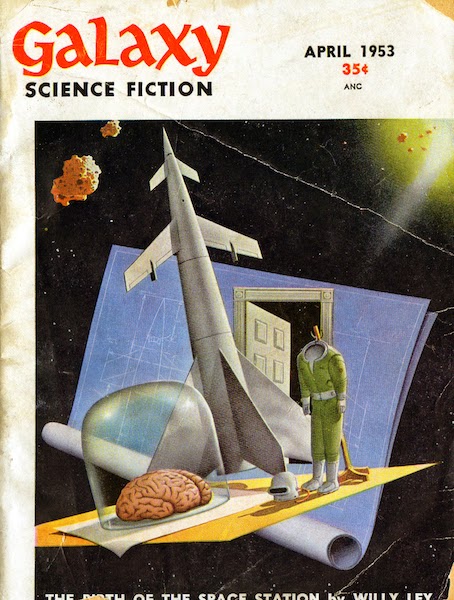 My sister Barbie sent me the above issue of Galaxy because she ran across it in a house sale and thought I might like it.  She was right, of course.  It contained a Kurt Vonnegut story and one by Murray Leinster and Robert Sheckley's "The Seventh Victim," which was made into the movie The 10th Victim, in which Ursula Andress killed a man with her brassiere gun.

But the coolest aspect of the magazine was Willy Ley's essay.  Ley was one of the founders of the Verein für Raumschiffahrt (Society for Space Travel) before fleeing the Nazis and settling down in America, where he was an extremely influential popularizer of rocketry and space travel.

"The Birth of the Space Station" is chiefly about Hermann Oberth's speculations about space stations in his pioneering book Die Rakete zu den Planetenräumen (Rocket to Interplanetary Space).    There is much to delight in here, but I won't retell Ley's essay.  Instead, I want only to share one quote from Oberth:

With their powerful instruments they would be able to see fine detail on Earth, and could communicate by means of mirrors reflecting sunlight.  This might be useful for communications with places on the ground which have no cable connections and which cannot be reached by electric waves.  Since they, provided the sky is clear, could see a candle at night and the reflection from a hand mirror by day...


Isn't that lovely?  Satellite communications by candle!  The book was written in 1921, remember, when radio was still in its infancy.  But what a wonderful combination of prescience and failure to extrapolate, of space stations and candlelight.


And speaking of Great Satan Amazon . . .

A short while ago, Amazon got into a dispute with the Hachette Book Group over whether the publisher should get to decide how much their books sell for or the retailer.  At the time, a significant number of self-published writers sided with Amazon because they believed that it was on their side.

It was not. Even more recently, Amazon began what the New York Times characterizes as an "all-you-can-eat" program, offering subscribers unlimited e-book reads for ten dollars a month.  A lot of indy writers who were doing pretty well there suddenly found their sales plummeting.  Some, who had quit their day jobs, found that what had been a career was now a hobby.

It would be easy to see this as a case of poetic justice.  But to sneer at the self-published writers who have been screwed over by a big corporation would be a mistake -- the same mistake that they themselves (out of innocence and ignorance) earlier made.  Writers should support other writers.  We are weak enough, God knows, compared to Amazon or Google or anybody else who thinks it would be a great idea if the business guys got all the profit and the artist guys had no choice but to provide their work for free.

We must all hang together, right?  You know how the rest of that goes.

You can read the NYTimes article here.

I agree. And this applies to game makers too, like myself. I see music in the same boat; they were the first victim. Basically creative content of all media (and creators) is (are)being devalued by the plumbers (meaning no disrespect to literal plumbers, noble profession) as the distributing tech companies flex their power, almost to WalMart levels. Game development used to be a stable career. F2P apps and greed have ruined it.