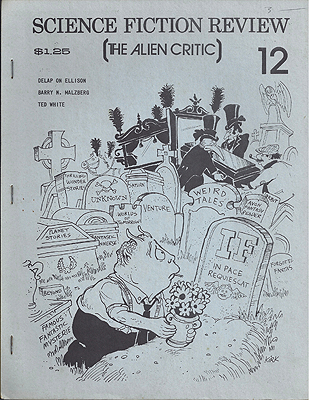 Richard E. Geis died almost a month ago on February 4, 2013, but in the way that happens when real life intersects with genre fame, the word got out to the rest of us only a few days ago.

How times have changed!  When I first became aware of science fiction fandom some thirty years ago, anybody who claimed to know anything about science fiction had to read Geis's fanzine, Science Fiction Review.  This was back in the old mimeograph-and-staples days.   Now, I suspect, only those of us who were there back then remember him.

Yet everybody who was anybody read Geis and took his opinions into account.  Why?  Two reasons.  One was that his zine reviewed as much of contemporary science fiction as could be managed.  The other was that he openly acknowledged his prejudices and recognized that other people felt differently

Dick Geis had one stroke of brilliance -- his creation of a fictional Other named Alter Ego, (that's him on the cover up above), a blue-collar demon with whom he would argue the merits of current SF.  Geis would take the default literary argument (Le Guin is brilliant, Wolfe is God, and good writing is essential) while, to his ostensible horror, Alter argued what would much later be the punk argument -- that SF was a trash art, that the beat mattered where grammar did not, that intellectual rigor meant nothing compared to the visceral stuff of plot.  Since he only engaged in these arguments over works that were worth arguing over, his writings pleased those who liked the works in question and those who did not as well.

Now he's gone, an exemplar of a way of fannish life that is rapidly disappearing in the rear-view mirror as science fiction careens wildly into the future.

Rest in peace, Dick.  May the afterlife be as impossibly hospitable to you as the world promised by your paperback covers.

Posted by Michael Swanwick at 9:44 AM

I did not know he died. He got 8 Hugos for his zines! He was one of the most important figures in science fiction fandom, a fine editor and op-ed writer, and my friend...died about a month ago. I had lost touch with him (he didn't answer a letter I sent him a few years ago) and didn't know he'd died. He published some nonfiction pieces by me (like my reviews of Sterling's The Artificial Kid and Schismatrix), and William Gibson's kindly review of my novel Cellars, and generally provided a lot of entertainment for me when I was a young, annoying man trying to write science fiction. I visited his house one time, in Portland...He gave a lot of good cartoonists, and other artists, a nice venue. He won the Hugo award for best semiprozine, as I recall, quite a number of times...

There's gold scattered through the back issues of Geis's magazine.

I didn't read it regularly. But the ones I did pick up I've kept in storage because they contain the longest, most substantive interviews with people like Jack Vance, Algis Budrys and Phil Dick that exist.

I know Geis posted a personalzine, TABOO OPINIONS, onto the eFanzines site, but he never scanned and posted his older fanzines.

That would still be a worthwhile product, if heirs' permission could be obtained. (If he had any; the only relative I remember him mentioning was his mother, who predeceased him long ago. I wonder if he left a will?)