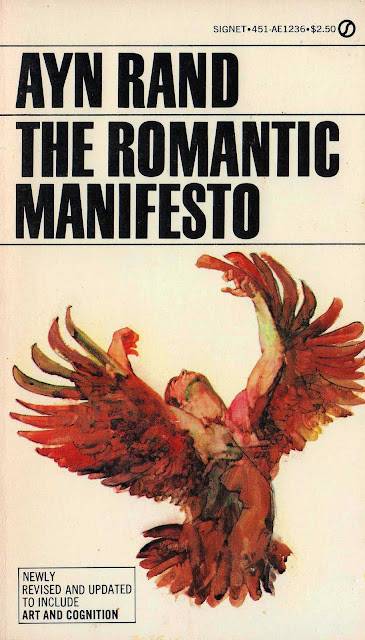 I just now read Ayn Rand's 1965 essay, "Bootleg Romanticism," not in a sardonic frame of mind but because the woman did write some very successful romantic melodramas which people bought in huge numbers despite the fact that they were punctuated by long essays about values, politics, and responsibility.  One can disagree with her philosophy and still admire the craft of that.

The essay begins by claiming that "thrillers" (quotation marks hers) are a kind of bargain-basement, skeletal form of Romantic literature.  That though lacking the literary quality of, say, Dostoyevsky, they deal with Man as an active agent of his (at the time, the convention of the male pronoun was universal, so let's not bust her chops over that) own fate, and deal with the issue of good versus evil.

So far, fine.  She goes on to single out for praise Ian Fleming and Mickey Spillane.  Not the exemplars of moral thrillers I would have chosen, but okay, I'm still listening,  "Because they provide heroes," she writes.  This is an argument that used to be common in science fiction and, I have to say, sounded just a touch jejeune even back then.

The bulk of the essay is taken up with a vigorous attack against the sort of thing she is opposed to and the sort of people who promote it:

A seedy, emasculated, uneventilated 'elite' -- a basement 'elite' transported, by default, into vacant drawing rooms and barricaded behind dusty curtains against, light, air, grammar, and reality -- today's intellectuals cling to the stagnant illusion of their altruist-collectivist upbringing: the vision of a cloddish, humble, inarticulate people whose 'voice' (and masters) they were to be.


Fierce words. But are they justified?  Can they be proved?  Will she name names?  Halfway through the essay, the Enemy has yet to be identified.  So far, there have been two quotations.  One is a brief excerpt from a New York Times review of an unidentified movie.  The other is a two-sentence synopsis of a Gunther Grass novel that had appeared in Time magazine.  Nothing in her comments suggests she has seen the movie or read the book.


Now, at last, however, Rand gets down to source of her ire:  An essay in TV Guide, praising a television show called . . . The Avengers.  She is horrified to discover that it is meant to be a parody of James Bond.  She is disgusted to learn that the show is meant to be a self-parody.  (Italics hers.)  There is nothing to suggest she has ever seen an episode.

Nevertheless, at this point Rand is confident that she has discredited James Joyce and Franz Kafka, both of whom are name-checked in the final sentence, though not a prior word was devoted to either before this, and so the essay may end.

As I said, I don't agree with Rand's philosophy.  But I expected better of her than this.

Above:  The cover of the book where I found the essay.  Does anybody know the name of the artist?  He/she did the covers of all the intellectually challenging and, often, polymorphously perverse, books back in the day.

" I don't agree with Rand's philosophy. But I expected better of her than this."

Serious question, that. What in her actions, writings, or public speakings would give you any impression she would have been discussing something that she had studied at all?

Quite frankly, this was a woman who wanted to be taken seriously as a thinker and philosopher and who nevertheless quoted TV Guide in an essay. In 1965. That's astonishing.

I don't know - from what I recall of Atlas Shrugged (I won't inflict a re-read on myself, even to check this), she managed to effectively conjure a vivid sense of futility and hopelessness in at least some of her fiction. Bleak landscapes lit by sourceless, shadowless light; decaying Art Deco cities populated by shuffling, purposeless masses of people, incapable of any agency, beset by anomie; joyless, narrowly-competent technocrats with no interior lives and mental horizons no higher than the bottom line - she evoked all of these, and no matter what she approved or disapproved of, she reduced human life to a humourless, pleasureless algorithm in which the best you could hope for was to get yours and keep it. The only other book to which I can compare it for evoking such an overwhelming sense of despair was Orwell's 1984 - no matter who prevailed, in either book, everyone lost. Quite an achievement.

[1] There's a truism to the effect that there are two novels that can change a bookish fourteen-year old's life: THE LORD OF THE RINGS and ATLAS SHRUGGED.

One is a childish fantasy that often engenders a lifelong obsession with its unbelievable heroes, leading to an emotionally stunted, socially crippled adulthood, unable to deal with the real world. The other, of course, involves orcs.

[2] Seriously, Rand was a moral idiot who in her youth wrote fawning love letters to a particularly nasty sociopathic killer/dismemberer, William Edward Hickman, while he was on death row. See forex --

[3] And as far as THE AVENGERS goes, in terms of agency Ayn Rand wasn't fit to knot Emma Peel's bootlaces.

My guess is that the cover is by Gervasio Gallardo; he did a lot of surrealistic covers for SF and SF-like books in the '60s and '70s.

Nope, not Gallardo. Very different style. No dis to Gallardo.