Hemingway Speaks from the Mountaintop 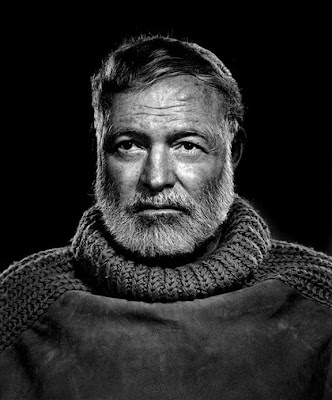 There were two Hemingways.  One was Papa, the macho, boisterous, lion-shooting,  Cuba-libre-swilling, bullfight-chronicling, sports-fishing parody of himself.  This is a guy you'd like to be.  The other was Ernest, the serious writer who was a fine craftsman and set an extremely high standard for himself.  Only another writer would want to be him.  And even then...

I just now ran across something Hemingway wrote (not said; it was near the end of his life  and he was in no shape to go to Stockholm so he asked the US ambassador to accept for him) in his Nobel Prize acceptance speech:

How simple the writing of literature would be if it were only necessary to write in another way what has been well written. It is because we have had such great writers in the past that a writer is driven far out past where he can go, out to where no one can help him.


If you're a new or gonnabe writer, I want you to take those words to heart.   And because you're a writer and thus have a particular genius for not hearing things you don't want to hear, I'll put what the man said in even simpler words:

Even if you succeed, your work may not endure.  But if you don't even try... well, it was your own decision to fail.

Here endeth the sermon.  Children, go and sin no more.