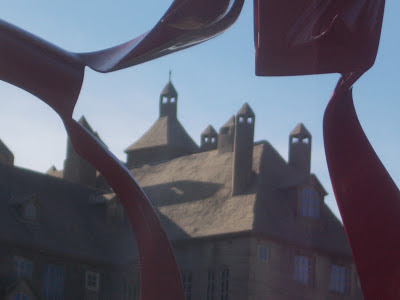 I went to the Michener Museum in Doylestown, PA, the other day. The Michener is not one of the great art museums of the world, but it's one of the great second-string art museums of the world.  Founded with money from James Michener and his wife, it's more open to representational art, narrative art, and illustrative art than many a better-funded museum, and it has interesting shows.

On this visit, the big discovery was Jerry Uelsmann, a photographer with a strong streak of whimsy to his work.   The museum played up the fact that he doesn't use Photoshop, but relies on traditional methods of developing film, dodging and burning and using multiple exposures in the darkroom.  But let's be honest, most creative work is hard work.  What matters is the end-product.  Which in Uelsmann's case is extremely good. 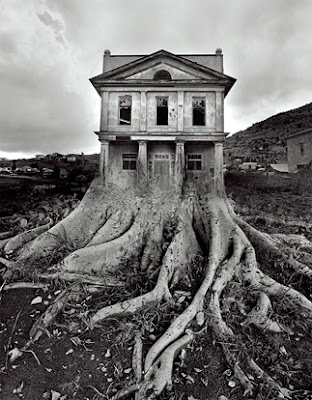 Just across the street, incidentally, is the Mercer Museum, which is . . .  well, it's . . . it's the foremost example of a Mercer Museum type of museum in the world.

Henry Mercer was a gentleman anthropologist. On a cruise up the Ruhr in early adulthood, Mercer was impressed by the eclipse of artisanal culture by industrial production, and resolved himself to preserving artifacts of preindustrial life. In the late 19th and early 20th centuries, Mercer collected pre-industrial hand tools and other implements of the past. He believed that the story of human progress and accomplishments was told by the tools and objects that people used and saw these time-honored crafts slowly disappearing from memory.

Mercer personally designed plans for a museum to house his collection, six stories tall and cast of poured-in-place concrete. Mercer's museum was completed in 1916. In addition to tools, it displays furnishings of early America, carriages, stove plates, a gallows, antique fire engines, a whaleboat, and the Lenape Stone. The Mercer Museum Library, which houses historical research materials, is located on its third floor.


There are more whimsical places in this world, but not many.  And, dazzling as it is, the museum serves a serious function and is a useful tool for researchers.   He built it himself, with the help of two laborers and a mule.


Above:  The rooftop of the Mercer Museum stares through Fred Schmidt's Juggler, a sculpture on the grounds of the Michener.

Jerry Uelsmann also showed up in the Met's "Faking It" exhibit from last year. An entire show about pre-Photoshop photo manipulation and trickery. The show's over now, but the website is pretty thorough and contains some great images, like a nineteenth century image of a man juggling seven copies of his own head:

The pre-photoshop photo manipulation in comment #1 sounds excellent. I sometimes think computers have ruined the world for a certain sort of cunning.