To do this past weekend justice would require that I put in several days writing an essay.  Suffice it to say that when people imagine writers leading glamorous lives, what they conjure up is a pale shadow of what An Evening in Honor of Gene Wolfe was like.

As witness the above video which Bill Shunn posted on YouTube, showing Gene Wolfe, Neil Gaiman, Peter Sagal, Jill Thompson, Patrick O'Leary, David Hartwell, and yours truly, among others, riding the fabulous vintage carousel.  This was after the private tour, the ceremony, the speeches, Neil's reading of "A Solar Labyrinth," the staged reading of another of Gene's stories by Terra Mysterium (very well done), an organ concert, the presentation of the Fuller Award, dinner, and many, many toasts.

After which, we got to ride the carousel.

I also got to spend time with Michael Dirda, Gary Wolfe, Peter Straub, and many other people whom I like very much.  It was as pleasant a crowd as I have been in.  Its composition was, I think, as sincere an honor as any Gene has ever received.


And because my photography has never been brilliant . . .

Most of my pix came out dreadful.  But I'll share three of them with you.  Not for the craft, mind you, but for the subjects. 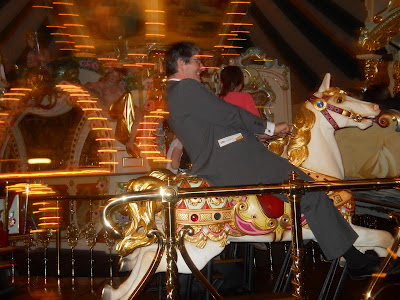 Above:  Critic and International Man of Mystery Michael Dirda on a white horse. 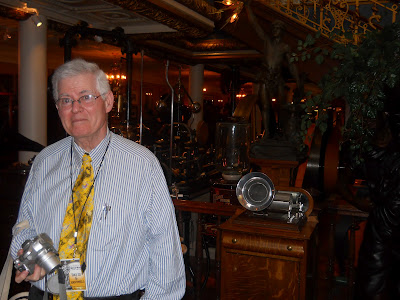 Above:  David G. Hartwell in the basement of the Sanfilippo Estate, with a sea of gramophones and steam engines behind him.  Just being there made you more steampunk that 99% of all steampunks combined.


And the third snap deserves a category heading all its own because . . . 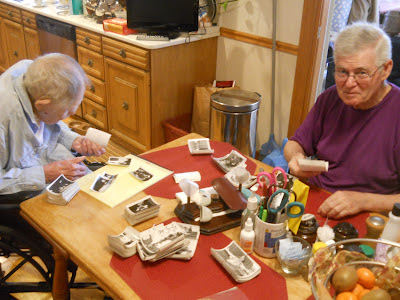 Saturday morning, I went to the house of Fred Pohl and Betty Hull to help Fred and David G. Hartwell go through a box of J.K. Klein's photographs of science fiction writers from conventions long past.  Shown above is the very kitchen table where Fred and David and I pored through a couple thousand photos.
One of my favorites was James Blish in a costume of Arab robes and appropriate facial hair.  He entered the costume event as "L. Sprague de Blish."
Above:  I hope you noticed the casual way I dropped the word "Fred."  Frederik Pohl and I are on a first-name basis.  Did I mention that?  No?  Well, that's just how cool I am.
*
Posted by Michael Swanwick at 10:21 AM

Michael, thank you so much for coming and being a part of it! I look forward to the next time our paths cross.

I was grateful to be a part of the event. Thank you for everything, Valya.

Wow for the event. And wow for Fred (even though he mispells it as "Frederik" forgetting that vital "c").