Looking Back At The Future 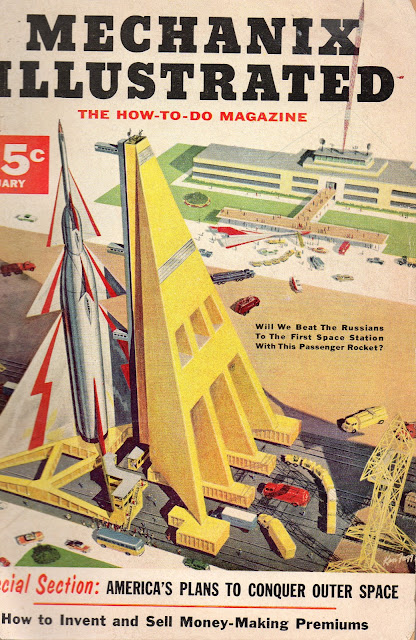 This was my childhood.  My father subscribed to both Popular Science and Mechanix Illustrated, and I used to go through his stacks of back issues looking for the "future in space" articles.  This one issue, from January 1956, had two articles by Willey Ley, another two by G. Harry Stine, and others by writers less well remembered.  How I loved this stuff!  And the future it promised too.

This is how the future looked to be, from Ley's article Here's When We'll Do It:

1959/60:  Several additional artificial satellites for specialized purposes, including the first animals in space.

1970/72:  Drone rockets orbit the Moon and Venus.  No probe is necessary for Mars, because an Earth-orbital telescope has already snooped out its secrets.

1973:  First trip around the Moon without landing.

1975:  First expedition to the Moon, involving at least three ships.

1977:  First expedition to another world, probably the asteroid Eros.

This is how the future was to be, with the caveat that if an effective nuclear rocket engine were successfully designed and built, everything after the space station would happen a whole lot faster.  And my Dad was one of the engineers who were making it happen.  I'm still proud of that.

Ley was spot-on about the date of the first artificial satellite, incidentally.  He just didn't think that it would be the Russians who launched it.

My father kept a lot of the books his dad had given to him in the 50s and 60s about space. Piles of books illustrated by RA Smith and his cohorts in that really striking style. Lucky guy worked with everyone from AC Clarke to Von Braun.

My experience to this kind of thing was limited to Omni, although I wasn't precocious enough to read the science fiction stories when I was that small.

I think we had plenty of pop science magazines, but I don't recall them being very preoccupied about space exploration back then (the early 80s).