Recreating "A Glass of Wine" 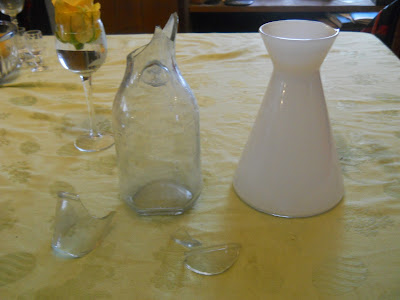 There can't be many science fiction writers who buy their writing materials at Ikea.  But that's what I did today.  Specifically, I bought a carafe, because . . .

Well, it takes a bit of explanation.  Back on July 2, 1991, I wrote a work of flash fiction called "A Glass of Wine" and scratched it onto a carafe I had lying around.  At that time, I forget which cheap wine came in carafes.  Whatever it was or is, Pennsylvania's state store system doesn't carry it anymore.  Or any other wines in carafes.  They've been replaced by boxes, I think.

The story-and-carafe were collectively a performance piece.  I went to a convention, bought a bottle of white wine to fill the carafe and requested a flock of clean wine glasses.  Then, when a friend came by, I'd say, "Read the story and I'll pour you a glass of wine."

So they'd read, I'd pour, they'd take a sip, and I'd say, "What do you say when somebody gives you something nice?"

And, suddenly realizing that after the story they'd read, there was only one possible answer, they'd smile and say it.

Alas, many long years ago, a decade at least, I dropped and broke the carafe.  But I saved the pieces thinking that maybe someday I'd replicate it.  It took me forever to get around to that particular chore because it's always easier to create something new than something old.  But today I happened to be in Ikea, saw a carafe, and decided it was time.

So I have my project for the weekend.

Those are the two carafes, the old and the new, up above.  It's going to be a pain copying the story from the shards to the new carafe because all other copies of the story were lost long ago.  But it'll be nice to have the old thing back.