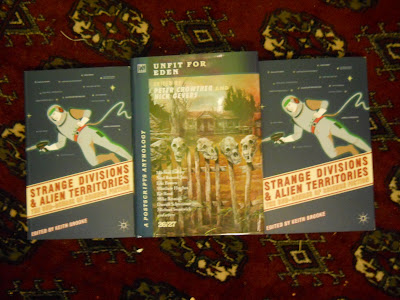 Two packages from Great Britain arrived in the mail yesterday. So I have a new story and a book intro fresh out in print.  There they are, up above, photographed on my office rug.

The foreword was written for Strange Divisions & Alien Territories: The Sub-Genres of Science Fiction, edited by Keith Brooke.  It begins:

Exactly what is a sub-genre?  The answer seems so obvious when one poses the question.  But a moment's thought undoes all such certainty.

Jim Kelly's contribution is titled "Who Owns Cyberpunk?"  Which I would hold up for your admiration as being a very good title.  My own answer would be "Bruce Sterling, but only because William Gibson doesn't want it."  But Jim gives the question a far more thoughtful and incisive examination.

Unfit for Eden is issue 26/27 of Postscripts, the hardcover anthology edited by Peter Crowther and Nick Gevers.  I haven't read any of the other stories yet, but they include offerings by Michael Bishop, Eric Brown Matthew Hughes, Kit Reed, Mike Resnick, Darrell Schweitzer, and Neal Barrett, Jr., among others, so it's a pretty safe bet.

My own contribution is "Pushkin the American," which begins:

The American, whose name has since been forgotten, came to Yekaterinburg in the Ural Mountains in the year 1817.  He was a young man and whatever disgrace had driven him so far from home had been left behind in his native Philadelphia.  Somehow he had found work as the secretary of an American industrialist who, along with his wife, was making a tour of Russia with a particular eye to the natural riches of the Urals.

The story answers the question of how a young American with no knowledge of the Russian language could go on to become one of Russia's greatest writers.

After I wrote "Libertarian Russia," every Russian or Russian-American writer I encountered for the next year demanded to know what I meant by it.  I can't imagine what they'll say about this one.


And because you're wondering about this blog's title . . .

The spine of the Postscripts hardcover has a typo.  In enormous letters, it reads:  UNIFIT FOR EDEN.  I'm sure they've already heard from a lot of people about this.  But it's nowhere near the typo that L. Sprague de Camp's Rogue Queen suffered when it was reprinted by Bluejay Books as ROUGE QUEEN.

That was one for the ages.

"But it's nowhere near the typo that L. Sprague de Camp's Rogue Queen suffered when it was reprinted by Bluejay Books as ROUGE QUEEN."

An edition I have kept, even though the thought of Sprague de Camp and "rouge queen" together would be anathema to him. (And with his complexion, probably a serious mistake to boot.)

Actually, Michael, I think you own at least .0684% of cyberpunk yourself, which given its current stock price, makes you practically a thousandaire!

Times have changed, Jim. Nowadays a millionaire is somebody who earns a million dollars a year. So, given that c'punk typically brings me forty to a hundred forty dollars per year, I am far from being even a thousandaire.

Ah, but who needs money when he has good friends?