The Further Adventures of Misha Cyberpunk 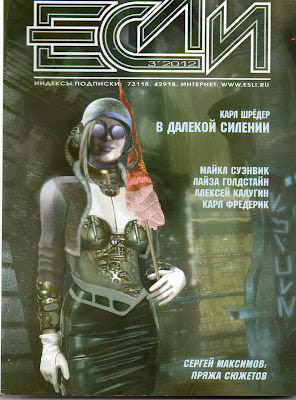 It's always a happy event to be in print again.  And in Russia too!

I just received my contributor's copy of Esli (which is Russian for "If"), which contains a translation of "For I Have Lain Me Down on the Stone of Loneliness and I'll Not Be Back Again."

So how did they translate that?  As камень одиночества.  Which is to say, "The Stone of Loneliness."

You'll note that my name in Russian could at a glance be mistaken (by someone who isn't familiar with the Russian alphabet) for  Misha Cyberpunk.  A name which sounds extremely cool when you realize that in Russia cyberpunk is pronounced as if it begins with a K.  I first noticed this back in the 1980s and for a while I toyed with writing a story about Misha.  I remember plotting it out:  He was an emigre in New Jersey and a hacker -- a good one, too.  Misha Cyberpunk was his handle, rather than his real name.  I seem to recall that he was supposed to be a sleeper agent but that he'd gone native.  And that's all I remember except for the title: "Red Star."

I probably would've written the story, but it required a lot of research into computer hacking and there were a lot of people who knew much, much more than me writing hacker sf.   So I put it off, and now I can't even remember the plot.

Vaya con Dios, Misha.  Wherever you are today, I hope you're happy.

But wait!  There's more!  I also received a copy of The Best Science Fiction and Fantasy of the Year Volume Six edited by Jonathan Strahan.  Which includes my short story "The Dala Horse" along with some twenty-nine others..


I've only started reading the volume but so far every story I've read in it -- which is to say the first one, "The Case of Death and Honey" by Neil Gaiman -- is excellent.

As stories in a best-of-the-year volume ought to be.

I'm on the road again.  But to  help shorten the way, I have a brand new set of audio disks, Timeless Time Travel Stories edited by Allan Kaster.  It is against the code to brag about my own story, "Scherzo With Tyrannosaur."  So I will merely mention that it won the Hugo Award when it first came out. 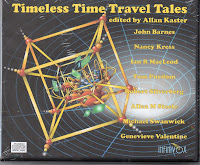 There are seven other time travel stories by writers whom every literate SF reader knows.  But I will admit that I'm particularly looking forward to Tom Purdom's "The Mists of Time," in which (as it says on the package) "historieans from the future are set on a high seas adventure to document a 19th century British Admiralty anti-slavery patrol."  Which inexplicably, since I'm a big fan of Tom's work, I managed to miss when it first appeared in print.  I must have been distracted that month.

I like the sound of the Tom Purdom story, but I don't do audiobooks - do you know where its print appearance was?

Tom Purdom's "The Mists of Time" is a great story -- one of his very best.

It was the story that showed me that Tom can be a great writer period (sometimes) with or without reference to the SF tag. In his depiction of the 19th century British Royal Navy officer in the story, for example, Tom understood the timeless human things that motivated the character and simultaneously made him different from us 21st century types. It's a story you could put in an anthology alongside the best character-centered SF of Kornbluth, Tiptree or Budrys.

Oh excellent - that means I've got it sitting around the house, not yet read!