When You Have Eliminated the Impossible... 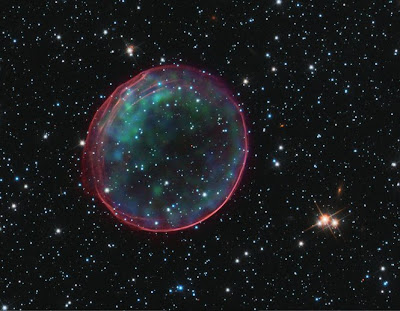 You've probably read about the recent findings about the Type 1a Supernova 2011fe, 21 million light years away, near the Pinwheel Galaxy, which became visible in August.  A team of astronomers from the University of California Berkley has concluded that because the PIRATE telescope in Majorca, Spain, wasn't able to detect the supernova just hours after it exploded (setting a new lower limit on the size of the star which exploded), the star must have been a white dwarf.


Meanwhile, however, astronomers from Louisiana State University in Baton Rouge have been studying SNR0509-67.5 (pictured above in a composite optical and X-ray NASA photograph), the remnant of a Type 1a supernova in the Large Magellanic Cloud, the light from which first reached Earth 400 years ago.  They identified the center of that beautifully symmetrical bubble as the likely site of the explosion and, since a large companion star would have survived the explosion and been flung away on a predictable course, searched for that star where it would inevitably be four centuries after the explosion.

Nowhere in that region, however, did they find any stars.  Leading them to the only possible conclusion, which is that the companion star had also been a white dwarf, subsequently destroyed in the supernova.
A neat bit of scientific fact-crunching and kudos to all involved.
As a science fiction writer, however, it seems obvious to me that this is not the only possible explanation.  My first thought is that an interstellar war went very hot and that the only way to end it was to eliminate the home system of one side.  My second thought is that a religious war on the home planet went auto-genocidal with identical results.
Nobody in the scientific community is going to take either of those speculations seriously, of course.  But I have to wonder: Has anybody ever taken the number of supernovae per trillion stars and factored it into the Drake Equation?  It could be a very tidy solution to the Fermi Paradox.

Very cool! Then, of course, is the possibility that cultures on the brink of ftl technology are swatted by the cosmos (see Larry Niven's "...Rotating Cylinders of Global Casaulity".

That's a good tone too. Or, from Niven's "The Fourth Profession," there's the possibility that alien traders have arrived at a client star to find that the local civilization has collapsed and there's nobody to build the laser banks they need to fill their light sails and send them on to their next market, necessitating a previously unscheduled nova.

There was a story recently - the author has escaped me - which was called something like "The Fermi Paradox is our Business Model".

The idea was that our world, along with thousands of others, had been deliberately seeded with life, not as a altruistic move, but more with an eye to post Fermi-collapse looting of the ruins a dead civilisation leaves behind.

That's a dark but nifty idea. And closely related to the notion (was it Zelazny who came up with this one?) that humans were planted here so we'd come up with an industrial civilization which would churn out enormous amounts of pollution, thus alienforming Earth.

[1]John von Neumann fairly famously proposed your thesis at a dinner party that included Enrico Fermi back in the day at Los Alamos.

There's an account in the autobiography of former AEC Lewis Strauss (same guy who crucified Oppenheimer). I'll try to look it up tomorrow, because von Neumann's phrasing was fairly nice -- and he was even prepared to consider astronomical phenomena of the scale of pulsars as signs of possible alien superweapon use.


[2] "was it Zelazny who came up with this one? ... humans were planted here (to) ... churn out enormous amounts of pollution, thus alienforming Earth."

I know a science fiction writer who came up with that idea first -- but hadn't gotten around to writing the story by the time Sturgeon did.

There's a lesson in there for all writers.

A rascally bunch, those science-fiction writers.

By comparison, rugby is for wusses.