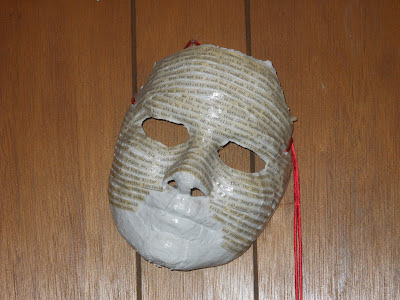 Some years ago, I was reading the Re/Search book on J. G. Ballard,   It was full of stories about how he had created collages which he ran in art magazines as paid advertisements, and put wrecked cars on display in a Soho  gallery as art, and the like.  Included in the book was a black-and-white photo of three potato-shaped white men seated on folding chairs and a young woman wearing only a bikini bottom and a fish net.  The caption read something like:

I put down the book and said, "Jeeze.  I feel like such a stick-in-the-mud."

So I took some surgical gauze and made a life-mask of Marianne.  When it dried, I painted it with white enamel paint.  Then I wrote a short-short story titled "The Mask," which I printed out and then cut into thin strips of paper.  These strips I pasted across the face of the mask in a kind of demi-mask.  Then I sprayed the whole thing with a clear fixative.   Marianne punched two holes in the side, ran a red silk cord through them, and hung the mask on the wall.

And I felt better.

Later, I expanded the story to something like three times its original length and sold it to Isaac Asimov's Science Fiction Magazine.  And later still, I took the original, made a few changes in it so that the story on the physical mask would remain unique, and included it in Cigar-Box Faust, my flash fiction collection.  So there are three distinct versions of the story.

But, still, its existence is due entirely to the desire not to be a dullard.  So too, I believe, is most art.


Above:  There she is, clad in the original story and smiling enigmatically.