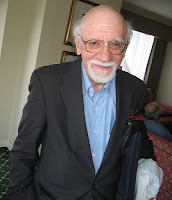 It's become something of a ritual.  Whenever a copy of Asimov's Science Fiction arrives with a story by Tom Purdom in it, I read Tom's story first (unless there's one of my own in the same issue, of course, in which case I read Tom's second).  Then, on finishing it, I say aloud, "Why don't more people write science fiction like this?"

In "Bonding With Morry," what I mean by "this"is fiction based on thoughtful, intelligent analysis of technology that doesn't yet exist but probably will soon.  In this case, robots, used (among other purposes) as devices to enable aging and increasingly feeble people to maintain an independent existence on their own.

At the story's opening Morry, who is just beginning to require such a device, is selecting its appearance.  He has to fight to get one with wheels instead of legs, camera-lens eyes, a speaker with a grill for a mouth, and a metal cylindrical body instead of a close approximation of a human being.  His problem is that he wants his robot, Clank, to look like a machine so he'll remember to treat it as one -- and everybody else wants it to look like a companion, someone he can bond with.

Over the course of the story, Morry fights several small battles to keep from being forced to accept a machine as his closest friend.  He suffers small defeats.  He's forced to give the robot a human-ish face and to rename it Clark.  But at the end, as he's dying, he's able to pass along a compliment to the robot's designers and programmers.

The heart of the story lies in an exchange with Morry's daughter Julie, shortly after he's had a stroke:

"Your counselor is just trying to help you.  And that thing is pretty ugly.  I wouldn't want it hanging around my bedroom after dark."

"And we're all skeletons and skulls underneath."

Here is the gist of the story.  Treating devices as devices allows Morry to treat people as people.  A woman who drops Morry as a friend because he refuses to "bond" with Clank is doing just the opposite.

When Morry dies, he does so with a clear-headed understanding of the difference between friends and tools and the value of each.  It's a small but very real triumph of the human spirit.

And, as I said earlier, it's the kind of story that a lot more people ought to write.