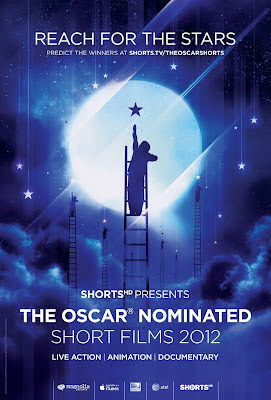 I'm on the road again and away from my notes, so I can't give a detailed review of The Oscar Nominated Short Films 2012.  But the short version is that this year's nominees are 1) well worth seeing, and 2) not as good as last year's.

Of course last year's crop included Shaun Tan's heart-tugging The Lost Thing, which I'm told was a ten-year labor of love, and every minute of it well spent.  But let's not hold that against this year's entries.

Of this year's batch, the most intelligent  was Wild Life, a very odd number about young upper class men in 1909 leaving England to seek adventure in Canada and one in particular finding himself overmatched by the reality.  Purely as animation, I thought that Nullarbor by Patrick Sarell, a tale of road rage on Australia's loneliest road was tops -- but it didn't make the final cut.  Pixel's Luna was once upon a time -- a very long time ago indeed -- based on my favorite story from Italo Calvino's Cosmicomics.  Utterly and completely changed, all it retains of the original is the notion of climbing to the Moon on long ladders from small boats in the ocean.  Pixel's version is charming, but Calvino's was better.

But the odds-on likeliest to win is The Fantastic Flying Books of Mr. Morris Lessmore by William Joyce and Brandon Oldenburg.  The animation is whimsical, the hero is based on Buster Keaton, and it has flying books.  How can it lose?  It is, alas, allegorical.  But I doubt that will hurt it.

And it's been posted to YouTube.  It's a hard life being an animator.