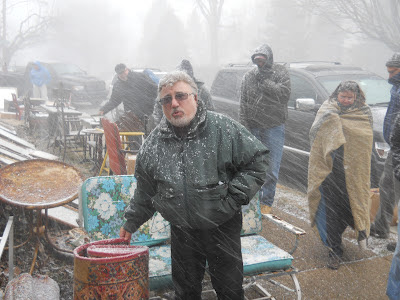 I heard a song once, called "Dead People's Houses," about going to estate sales, which celebrated the combination of looking for bargains and snooping in other people's lives.  It ended with the line, "We'll make some young strangers happy when we die."  Which seemed a positive take on the whole thing.

Marianne and I went to an estate auction this weekend, run by Barry S. Slosberg, Auctioneer, who's something of a fixture in Philadelphia.  About an hour into the event, an unanticipated snow squall blew up and Barry Slosberg (above) ripped through the items displayed outdoors with efficiency and good humor.

Marianne bought a pair of lawn chairs an I bought a master plumber's cabinet, which he banged together to hold screws, plumber's candles and other supplies.  I have plans for that cabinet, which I'll tell you about in one or three years when they come to fruition.

And, oh yeah.  The owner of the house died of old age and, from what we could conclude from our snooping, lead a good life.  Kudos to him.