In Tribute to Ursula 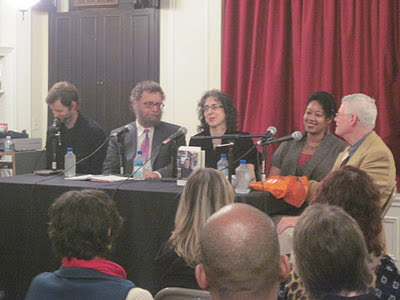 Well, the month has passed the 2,000-mile point and has shown no signs of slowing down.  But before I hop in the car again, I should mention the Wave in the Mind: A Tribute to Ursula K. Le Guin panel on Friday at the Center for Fiction in New York City.  It was supposed to be a forty minute or so panel, but we pushed it well over an hour and nobody in the audience complained.  There are so many good things to be said about Le Guin's work!

We were all articulate and interesting.  Nobody hogged the mike and nobody shrank back into the shadows.  The audience, being mostly mainstream, were amazed at how much we all knew and a lot of them took copious notes.  So I think I can say it was an unalloyed success.


Afterwards, I realized that the key to Le Guin's artistry lies in one passage in The Word for World is Forest.  In the novella, humanity colonizes a planet with a native race that is almost infinitely exploitable because they are absolutely peaceful.  But one day, a native named Selver who has been mistreated beyond endurance does something unthinkable, and kills a human being.  He flees into the forest, where his kind treat him with absolute respect and obedience, because he is a god.  And he’s a god because he’s taught them a new word.
Le Guin wrote:

“If a god was a translator, what did he translate? ... Was [he] one who translated the language of dream and philosophy, the Men’s Tongue, into the everyday speech?  But all Dreamers could do that.  Might he then be one who could translate into waking life the central experience of vision: one serving as a link between the two realities considered by the Athsheans as equal, the dream-time and the world-time, whose connections, though vital, are obscure.  A link: one who could speak aloud the perceptions of the subconscious.  To ‘speak’ that tongue is to act.  To do a new thing.  To change or to be changed, radically, from the root.  For the root is the dream.
“And the translator is the god.  Selver had brought a new word into the language of his people.  He had done a new deed.  The word, the deed, murder.  Only a god could lead so great a newcomer as Death across the bridge between the worlds.”

Le Guin is a more benevolent translator/god than Selver.  But that's what she's doing.  She's in the god business.  As, to the limits of our abilitities, are all we who labor in the vineyards of literature.