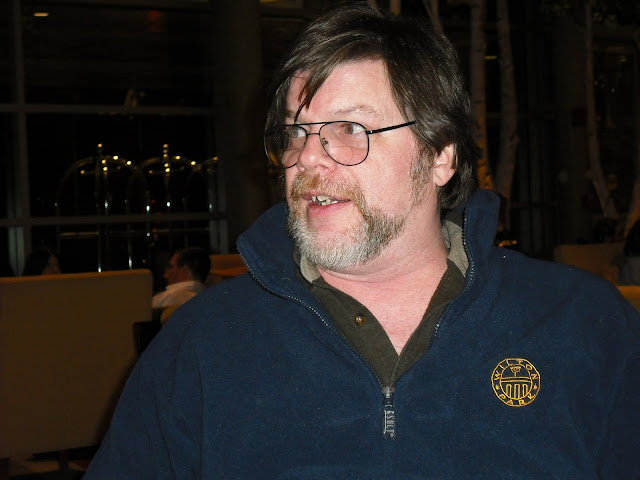 Right at this moment, I'm in Amherst, for reasons I'll relate later, and hoping to make it home before the snow hits again.  Boskone was great fun, as usual.  I spent a fair amount of time with Greer Gilman, wonking about fantasy.  I sort-of got to meet Alastair Reynolds, but not to spend any time talking with him, dammit.  And I met Tom Shippey, who wrote the absolutely brilliant J. R. R. Tolkien: Author of the Century.  Easily one of the most interesting talkers and storytellers there -- and I say that as somebody who was effortlessly outclassed by the man on a panel about the LotR movies.

Easily the strangest panel was the one on weirdboiled (Paul Tremblay's term for it) or noird (this one courtesy of China Mieville) fiction.  Paul was on the panel and related that he'd told China his own term would prevail because "China had named the new weird and you only got to name one movement per lifetime."  I won't try to define weirdboiled (I'm not perfectly sure I could), but everybody agreed there was something there.  You may want to keep an eye on Paul's blog.  Or read his novel The Little Sleep or its sequel No Sleep Till Wonderland.

I got to see Vernor Vinge again, if briefly, and the undeniably brilliant Karl Schoeder, and spent some time talking at length with Jane Yolen.   And Melinda Snodgrass stopped by to say hello just as I was leaving.  Better late than never, I suppose, but if would've been much better if we'd had some time to schmooze.  And there were many more folks I got to hang with.  By the time I had to leave, I was feeling quite full of myself for the exalted company I keep.

Quote of the con, for me, was from my good pal Allen Steele, who, in the middle of one of his many stories, said, "And there's another story there -- but that's another story."  A close second went to David Hartwell, who said, "In a parallel world, Murray Leinster was as famous as Robert A. Heinlein."  Third would be Ellen Asher's observation, reflecting on her World Fantasy Lifetime Achievement Award, her guest of honor gig at at this year's NASFIC in Reno, and other recent honors that, "Retiring was the best career move I ever made."

And so, as Samuel Pepys was wont to say, to bed.

If you are truly in Amherst proper, you are in my habitat. My father and I both went to Amherst College. I also went to Amherst High School when my father was teaching at UMass. In many ways, that town, that area, is the soul of my writing. My first (very bad) fantasy novel was penned there in the halls of the high school, while skipping classes. Say hello to my town, which knows me as Isy.

BOSKONE was great! I was looking for an opportune time to introduce myself and tell you how much I love your writing but 1) I was shy and b) I can't for the life of me remember the title of the story you wrote that blew my mind. Next time I'll overcome shyness and amnesia and introduce myself.

All right, now I'm jealous of the people who made it to Boskone.

My thanks, Ken. Stupid mistake. What a kludge the human brain is!

Chizzle, I hope you do feel free to say hi next time. To me or anyone else whose work you like. (If you forget titles, a simple, "I like your work" is always genially received.) Writers tend to be kindly disposed toward readers. What with us belonging to that same tribe ourselves and all.

Michael,
It was great to meet you at David Harwell's Literary Beer at Boskone. (How pathetic it was that I didn't know you were Michael Swanwick until about halfway into the conversations. I had read only a few of your stories at that point.)

I am now starting your collection The Dog Said Bow-Bow, and your 2002 novel Bones of the Earth, and enjoying both.