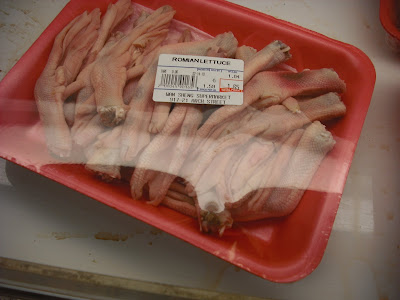 That's not really "Romian Lettuce" above, but a package of duck feet.  I was in a grocery store in Chinatown, stocking up on this and that and discovered that all the meat was wonderfully mislabeled.

I was in Chinatown because it was close by St. Stephen's Theater, where the Lantern Theater Company presented The Breath of Life by David Hare.  It was a terrific production, though more for the bravura performances by Ceal Phelan and Cheryl Williams than for the play itself.  Here's the plot:  a dumped wife who's planning to write a memoir spends an evening with her husband's ditched mistress who thinks it's a bad idea.  They're both women of a certain age, as the saying goes, and that's the absolute best thing about the play.  I can spend forever listening to smart, experienced women talk, especially if they're "difficult" women, as Ms Phelan's character was.

What I liked least?  What they talked about was the husband/boyfriend, and they spoke about him as if he hadn't really done anything wrong.  I realize that he was the excuse for banging these two dissimilar women together, but I really wished the playwright had found a more interesting excuse.  It made me wish that a dramaturge would go through the collected Dykes To Watch Out For and craft a play from it.  Or, better yet, a mini-series.

The play doesn't really achieve much in the end.  I saw the Wednesday matinee, which meant that the audience was almost entirely made up of pensioners, and at the end they gave it enthusiastic but not rapturous applause.  Given that it addressed summing-up-of-one's-life issues that everybody in the audience was surely going through, I thought that was telling.  But I also think the play is going to be around for a long time.  It has two serious virtues.  First, because it has one set and two actors, it's cheap to put on.  And second, it gives actresses of a certain age the opportunity to strut their stuff.

For which, in this case, I was grateful.

Hey, I read about Stinking Bishop cheese in one of your posts. Where did you find it in Philadelphia. This nose would love to know.

Sometimes. At least twice a year. It's by no means predictable.

It's an extremely rare cheese (and for such a rare cheese surprisingly reasonable), so it's a good idea to chat up the cheesemongers in the hope that they'll let you know when a shipment is coming.

$1.59/lb seems like a pretty good deal on duck feet. I sure hope you took advantage of this.

If it had been chicken feet, I'd have been all over them. I know what to do with a chicken foot. But honestly ... I'm not sure how to treat a duck foot as it deserves.

Any suggestions out there?

Honestly, I'm like you... I have an idea how you'd cook other stuff with skin and cartilage such as chicken feet, chicken wings, pig's feet, etc., but I don't know specifically about duck's feet. I'm guessing they aren't too different.

The Chinese version would involve getting the feet soft enough that you could chew through the skin and cartilage and so on without too much effort, but not tender enough to be falling apart or slipping off the bones (if not removed). I have no idea how Western cooks prepare these things. :)

The curling post went up by accident -- I was trying to schedule it for later in the week. It'll go up in a day or two.

I've been googling about and not coming up with western uses for duck feet. Presumably they would have the same virtues as chicken feet in stock.

I did come across a description of boning duck feet for a Chinese prep ... but that would seem to negate the Chinese traditional valuing of texture, so I'm dubious. Plus being way more work than I'm up for. I think I'll go back this weekend and just ask the lady at the checkout. If I can't get a lead there, I'll call up my brother in law ... Sheih-Ya's a good cook.