A Day in Amherst 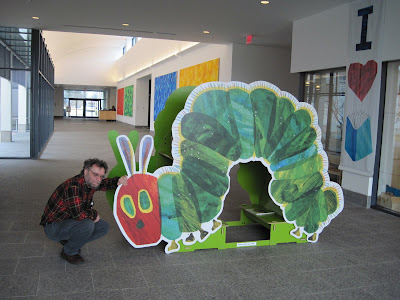 I am returned but newly From some ultimate dim . . .  No, no, that's not right!  I'm home from Amherst.  Being a postmodern literary type, I went there not to view the Emily Dickinson sites, but to visit the Eric Carle Museum of Picture Book Art.   Where they had a show titled Golden Legacy:  Original Art From 65 Years of Golden Books.


Yes, I may not have seen the Dickinson Homestead, but I have seen the original art for the cover of The Color Kittens.  You may now stand in awe of me.  There were some sixty pieces of art from such classics as Tootle and Scuffy the Tugboat (both illo'd by the immortal Tibor Gergely), and you can bet I examined them all closely.  I learned, not at all to my surprise, that those pictures I remembered best were also the most artistically accomplished.  Interesting that at such an early age, children have such a good eye.


The museum has a splendid library of picture books, which children and even adults can look at.  It's arranged, most sensibly, by artist rather than writer.


The show lasts until February 28, if you care to make the trip.


On the way out of town, I dropped quickly by the graveyard where Emily Dickinson was buried, to pay my respects.  Alas, I could not find her grave quickly and since we were anxious to get home before the snow, there was not the time for an extended search.  But the yard is a quiet place and, though surrounded by buildings, feels isolated.  It seemed, somehow, fitting that this most retiring of poets had evaded my visit.


Above:  There I am with The Very Hungry Caterpillar, Eric Carle's single most famous creation.