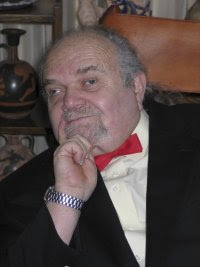 In retrospect, I shouldn't be so shocked. Charles N. Brown, Locus's publisher, editor, and co-founder (the magazine's punctiliousness in acknowledging the part played in its creation by his first wife, Marsha Elkin, is a good indicator of the standards he established) died in his sleep on his way home from Readercon. Charles' health had been fading in recent years. His mobility suffered. His skin had an unhealthy pallor. He occasionally seemed to be having a bit of trouble breathing.

And yet, Charles was so full of life that none of that registered. You'd see him zipping about a convention, hunched over the handlebars of his power chair as if it were a motorcycle, one side of his mouth quirked up in a half-sardonic grin, and it would never occur to you that he couldn't go on like this forever. The last time I was interviewed by him, I was warned by one of the Locus staffers not to be shocked by how much his mental acuity had dimmed. Which made it a little humbling that he was clearly still a lot sharper than I was.

I spoke to Charles couple of times at Readercon . . . nothing profound or deep or meaningful, just chitchat. He was, as almost always, visibly happy, just digging the hell out of everything. I think he saw the Mirrlees interview. I know he was planning to. It was exactly the sort of thing he liked most -- food for an avid and wide-ranging mind.

And now, alas, he's gone. Vaya con Dios, Charles. May you enjoy the next life every bit as much as you did this one.


(I swiped the above picture of Charles from Locus Online. Which is something I ordinarily wouldn't do, but in this case I'm sure they don't mind. You can read their preliminary news item here.)