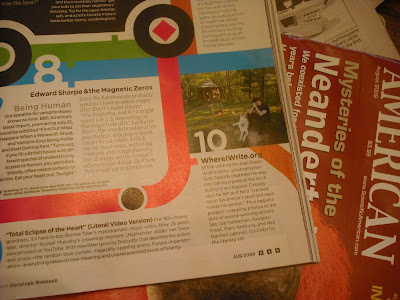 I got an email from Kyle Cassidy the other day, saying:

When was the last time you were called a genius in WIRED magazine?

He was referring to the item in this month's issue shown above, number ten in their "what's wired" playlist. Which reads in its entirety:

WhereIWrite.org
While visiting Michael Swanwick's home, photographer Kyle Cassidy charmed his way into taking a peek at the sci-fi author's workplace. Cassidy ways he felt as if he'd "cracked open Swanwick's skull and seen inside his genius." Thus began a project: snapping photos at the lairs of award-winning writers like Joe Haldeman, Gregory Frost, Piers Anthony, and Neil Gaiman (above). It's Cribs for the literary set.

And I, of course, immediately wrote back to Kyle, saying:

Wait, wait. You do all the work, and I get the praise? Maybe I am a genius after all!

Kyle, of course, is not only a photographer but also a writer. Which makes him that rarity of rarities, a super-genius, and thus entitled to employ the suffix 124c41+.