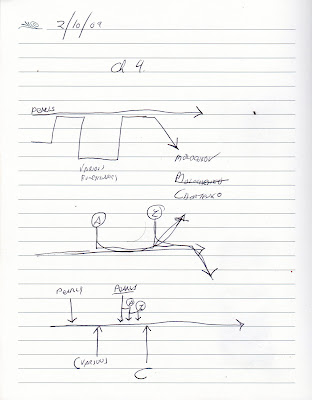 Three plot diagrams for Chapter 4 of Dancing With Bears.

In the first one, the top line represents the Pearls.  The bottom line is probably Surplus, dealing with several functionaries, interacting periodically with the Pearls, and ending with a meeting with the character who was originally named Molochov.  You can see that it's here where I spontaneously changed his name to the far superior Chortenko.

In the second diagram, Z is obviously Zoësophia.  But whether A stands for Aetheria or Arkady or somebody else entirely, I don't know.  It may be a reference to the faked suicide note incident.


The third diagram baffles me.  My best interpretation is that the line represents Surplus, who is continually present in the chapter, beset by frequent interactions by the Pearls, various functionaries, and finally Chortenko.  In the second appearance of the Pearls, the A is almost certainly Aetheria and I'd have to guess that I meant to suggest "the Pearls A to Z" -- a reminder to keep all of them in play as distinct individuals.


But that' only a guess.