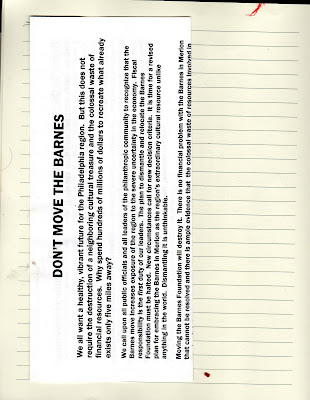 This is a piece of ephemera, a flyer handed out by Barnes activists, folded in three and pasted in my notebook in such a way that it can be unfolded and read in its entirety.

To make a long and convoluted story short, the Barnes is a fabulous art museum, at present still in its original building outside Philadelphia.  Barnes himself was a brilliant collector who hated the Philadelphia art establishment --- who, at the time, despised him for collecting Renoirs, Cezannes, and so on, rather than (say) Landseers.

In the 1990s the foundation got in a perfectly pointless fight with its rich neighbors, who objected to visitors parking their cars on neighborhood streets.  Things escalated.  Millions were pissed away in lawsuits.  The Barnes went broke.  The Commonwealth bailed them out.  But part of the deal was that in exchange for an extremely large amount of public money, the collection had to go into a new museum, built for that purpose in Philadelphia.

Some people quite understandably wanted the Barnes to stay where it was.  They were angry and confrontational and they lost.  They kept protesting anyway, long after the point where it was obvious that their protests were not going to work.

That's the extremely simplified version.  To get the whole story you'll have read a couple of books and at least one movie.