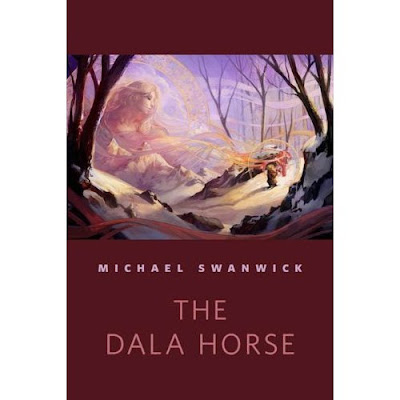 It's a sweltering hot day, but I don't care.  I have a new story out!  Or, rather, I have a new e-story out.  It's called "The Dala Horse" and it's a Tor.com e-book.  Available at Amazon.com for ninety-nine cents.

Or -- whoops! -- no, I just checked and I almost have new story out.  It's available on preorder, but it's not coming out until July 12.  Well, what the heck, it's a hot day and it's almost the cocktail hour, so I'll talk about it anyway.

I began thinking about this story when I was goh at Swecon in 1999.  I was at the pub meeting after the convention and I took a dala horse I'd bought that day out of my pocket.  A silence descended over the bar.

Finally, one of the people on the con committee mumbled, "My parents have one of those."

So dala horses -- those blocky little wooden horses painted bright colors with flower harnesses they sell to tourists in Sweden -- are not cool.  And things that are not cool are very interesting to try to make cool.  I knew in that instant that sooner or later I'd write a dala horse story.

Something terrible had happened. Linnéa did not know what it was.  But her father had looked pale and worried, and her mother had told her, very fiercely, "Be brave!" and now she had to leave, and it was all the result of that terrible thing.

Off Linnéa goes, like a good little child, across the snowy mountain alone to the house of her Far-Mor -- her paternal grandmother.  Along the way she meets a troll, who eats girls.  And he's being hunted by something far worse than he could ever be . . .
It's a science fiction story, it has a happy ending, and it costs less than a buck!  How can you go wrong?
How well will it sell?  That's an interesting question.  We'll find out, I guess.  Props to the good folks at Tor for trying this experiment.  Meanwhile, what a terrific cover/illo the Tor.com commissioned for it!    My compliments to whoever the artist is.
Above:  That's Svea, filling the sky.  All Swedes know who Svea is.  Though they don't know who my Svea is.
*
Posted by Michael Swanwick at 2:57 PM

$.99 for a good story is a good deal. Especially when you take into account the fact that publishers who print short story anthologies often reprint stories from other collections, which sort of waters down the price of a full collection.

Of course, if it's put together well, there is something to be said for a good collection. Do you think this book will 'belong' to a collection of your short fiction, or will it be one of those that gets collected simply because it hasn't been collected yet? Does that question even make sense?

It's a good story, so it'll almost certainly go into my next collection, whenever that is. I should probably put together a list of new uncollected stories and see how far away that is.

I always have mixed feelings about those collections of "replevinings from the waste basket," as James Branch Cabell put it. On the one hand, they're always so much weaker than the author's other books. On the other hand, the completist in me wants to have read EVERYthing. So I guess there's a genuine need for them.

I'd likely feel less conflicted if I had ten times the shelf space I have now.

And may I just say that I zipped through my new hardcover of 'Dancing with Bears' and enjoyed it very much... looking forward to re-reading more slowly when I'm not so caught up in the action.

What, no Amazon referrer link? How are we supposed to siphon as much money to you as possible?!