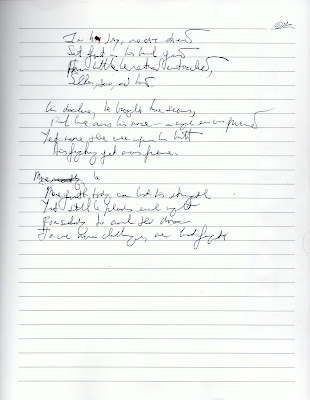 In his day, no cat dared

Set foot in his back yard

From battle he returned untouched,

Silken, sure, and hard.

In decline, he brought home scars

Pink line across his nose -- a single ear was pierced

Yet none there were upon his butt

His fighting yet was fierce.

Ouch.  Even for a scribbled first draft that's dire.

Yet still he pleads each night

For somebody to [something] the door

To one more challenge, one last fight.

The attentive among you will have noticed that I dropped a page between yesterday's post and today's.  That's because said page contained a scan of Marianne's driver's license, blown up to 8 1/2 X 11 size, which she'd had to fax somewhere for some reason of officialdom, and though it was folded in a way that only one quarter of the image showed, I decided it might be possible for somebody to extract personal info by analyzing the bleed-through on the reverse.

Not that I believe anyone here would do such a thing.  But why take chances?