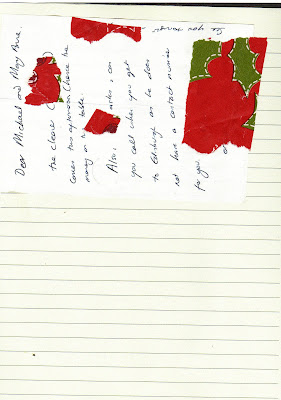 This is just a note that was left to us by a friend when we were staying with her in London, just before Marianne and I took the train to Edinburgh.  That would have been early in 2009, just after Marianne retired from the Bureau of Laboratories.  We went to London, Edinburgh, and York in a kind of victory lap.

This particular notebook didn't go with us, though.  The note somehow made its way back to America with us, and so I pasted into the most convenient notebook.  As a kind of diary substitute.  For some reason I seem to be congenitally incapable of keeping a diary.