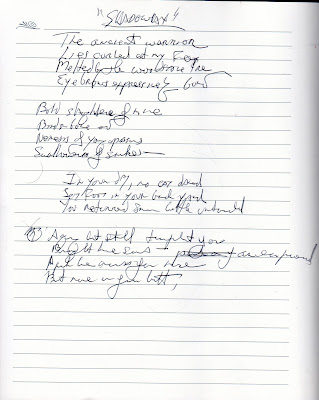 A first draft, written while the noble and then still alive but very old cat was as described.  Forgive my failures as a poet.  Admire the beast himself:

lies at my feet

curled by the wood stove fire

In your day no cat dared

set foot in your back yard

you returned from battle untouched

Aging but still triumphant you

a pink line across your nose

but none on your butt

Doggerel though it is, this is an unfinished first draft.  I'm pretty sure you'll have to endure several more.  It's worth nothing that the facts come before the scansion and the rhyme, though.