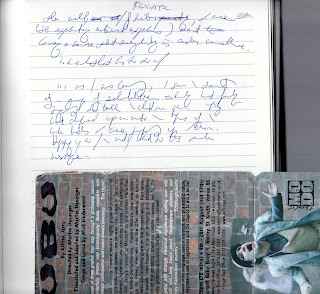 the wall flickers [something something], and are (the explanatory material explains) meant to convey a sense that everyone is under surveillance.

. . . as I was leaving, I saw the docent of a group of schoolchildren calmly but firmly trying to talk the children down.  They had climbed up into and atop of the [something] beds, and were jumping up and down.  Happy with the art, blind to its darker message.

The two places where I jumped ahead, I was scribbling down thoughts to use later -- in the latter instance at the end of the review.  Probably I was working from the scribbles then, copying them out in improved form on the word processor.

Down at the bottom is a flyer for Ubu, a version of Alfred Jarry's Ubu Roi that I saw in the Festival Fringe in Edinburgh.  When Yeats saw the original play, he wrote, shaken, "What more is possible?  After us, the mad gods."  Theatre Modo made the play even more scurrilous.  It was easily the most extreme piece of theater I've ever seen.  There are no words that do justice to how flat-out brilliant it was.

Probably I'd found the flyer lying about the house and pasted it into the notebook to preserve it.