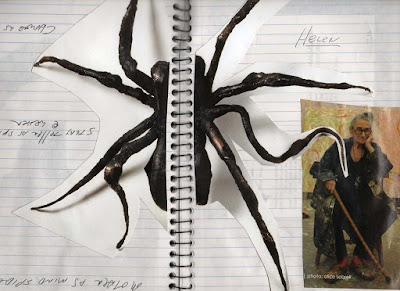 Introducing Helen. There's more to her than meets the eye.

Written upside-down--so they won't necessarily be taken as gospel by any readers are three quick notes scrawled to myself:

I apologize for the misspelling of "crone." But I was writing (and thinking) too fast to care much for accuracy.

The influence of Louise Bourgeois is pretty obvious here. Late in life, she created those wonderful, terrifyingly realistic giant spiders with long steel needles at the end of their legs and said that they were all about her mother. Who made a living repairing tapestries, using long steel needles. So it's not the slap in her face it might seem.

I liked the spider representing the archetypal woman-as-maker, which fit Helen right down to the ground. I was also fighting a fight all the way through with received archetypal images of women were were almost all pretty or dainty or passive. I wanted to get at that primal fierceness that lurks inside us all.

And, ounce for ounce, you don't get much fiercer than a spider.

There will be news.


Above: Seventh image. Three to go.

Posted by Michael Swanwick at 12:37 PM