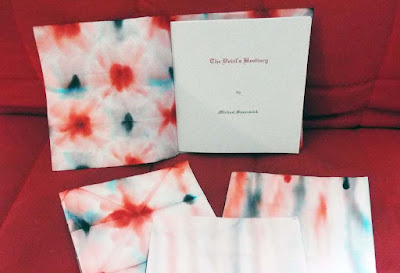 The Devil's Bestiary, a dark, brooding, and occasionally scabrous piece of fun composed by your truly, will be made available for purchase tomorrow, Thursday April 9, at noon Philadelphia Time (that's 4 p.m. Greenwich Mean Time) at the Dragonstairs Press website, www.dragonstairs.com.

But not a minute before then.

The Devil's Bestiary is Michael Swanwick's cynical,whimsical take on twenty nine creatures of myth and fables.  It is 5 ½ inch square format, with an outer wrapper of hand-dyed kozo paper, hand-stitched, numbered, and signed by the author.  It is published in a limited edition of 45, of which 40 are available for sale.


The signed and very limited edition chapbook will go for $12 in the USA and $14 elsewhere, postage included. (When I tell Marianne she's not charging enough, she just glares at me.)  Which means that it will sell out pretty much immediately.

It's a lovely thing and I'm proud, as the content provider, to own a copy.

Here are a couple of typical entries from The Devil's Bestiary:

A thousand years ago, a demon grew tired of his existence and came down to Earth to surrender himself to the first saint he encountered. He’s still looking.

A ghoul was caught in the act of anthropophagy by a camera crew from the local Action News, who needed something sensational for sweeps week. He was tried by an ambitious D. A. and defended by a lawyer from the ACLU. The jury was hung, asnd he got off. But afterward? Afterward, it was lean times for him indeed. He was not allowed near graveyards and he could not stomach non-human flesh. Vegetarianism was out of the question. He almost starved to death before an innovative mortician offered him honest work.

Today he’s the picture of affluence. Respectable people pay extremely well for his services, for he returns the remains of their loved ones to the earth in the most environmentally responsible way imaginable.


Those, at the low-rez pic above, should tell you right away whether you need a copy or not.

Noon whenever noon is in Philadelphia.