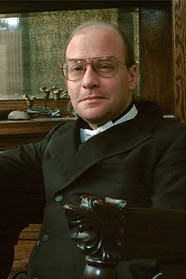 Everybody called him Mike because there were already John Fords in the culture--a movie director, a Jacobean playwright, a... well, if you're curious, you can check out Wikipedia's disambiguation page here. I didn't know Mike all that well, though we considered each other friends. But on the happy occasion of the announcement that his books will be coming back into print (if you don't know the details, you can find find them here), I thought I should present an extremely simplified sketch of the man. Just to give you some idea of what you missed.

Mike was, to begin with, intimidatingly quick-witted. Even in the science fiction community, where the default setting is Brilliant, he stood out. That shtick where you take a HELLO, MY NAME IS sticker and add the words INIGO MONTOYEZ. YOU KILLED MY FATHER. PREPARE TO DIE...? He did that first. I know because I was at the Worldcon where he did it and whenever writers read the tag for the first time, their faces would go dead for an instant as they thought: I could have come up with that. Why didn't I? Which was, by then, because for a year or three he lived in Philadelphia, a familiar thought for me.

Several people have commented on how "reserved" or "withdrawn" Mike was. But my reading of it was that that he was simply intensely private. There was certainly no lack of warmth to him. If you were talking to him, and said something amusing, either intentionally or not, a little smile would appear at the corner of his mouth, suggesting that he was enjoying the hell out of the moment but was suppressing a laugh so as not to give offense.

Mike Ford's literary art was all over the place. It drove those who knew him mad. When we were all wishing he'd write more crowd-pleasing books like The Dragon Waiting, he'd pen something like Winter Solstice, Camelot Station, a series of poems where the knights of the Round Table arrive in Camelot by steam locomotive, which he made into a chapbook and sent to his friends at Christmas  or How Much for Just the Planet?, a Star Trek novel that was also a Gilbert & Sullivan-style musical comedy--complete with songs! It was as if he were desperately looking for new ways to fail.

"This is the first time a Christmas card anyone received has won the award," she corrected me.

Mike Ford's work could be dauntingly difficult, yet he was deeply involved in gaming and other fannish activities. Gardner Dozois put it best when he said, "Mike is that rarest of animals--a fannish intellectual."

So there's what you missed. Mike died far too young. His friends--and he had a lot of them--were all shocked at his death. We still miss him terribly. But now his books are coming back into print.

Soon, you'll be able to get to know him for yourself.