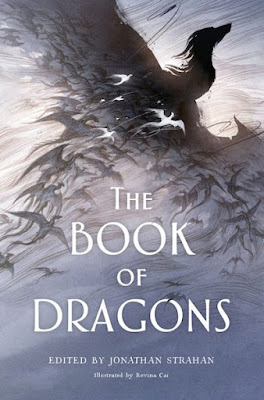 Good news! Jonathan Strahan's new anthology, The Book of Dragons has just been announced. That's the cover up above.

The collection will be published this summer by Harper Voyager and has been years in the making. More so in my case, I suspect, than most of the others. Somewhere between several and many  years ago, I began writing my own contribution, "Dragon Slayer," with the words:


Even the skeptical among us will have to admit that I didn't skimp on plot!

I made a strong beginning, moved Olav through several lands and pages and... came up against a wall. I had a dragon by then, but didn't know why it wanted what it did and what that meant. So onto the back lot of my hard drive it went, to languish with a hundred other partially-written stories, waiting for the day when inspiration would strike.

Then one day inspiration struck, in the form of Jonathan Strahan inviting me to submit a story to his dragon anthology. The attractive thing about the invitation was that he had a llong deadline--over a year. Surely, I thought, given that much time, I could figure out exactly what was going on.

And as it turned out, I could. It was a close thing, though. There is something lounging deep within my brain, looking like a cross between a gigantic lizard and Orson Wells, which says, "We shall write no story before its time."

I can't tell you what's in the collection because they haven't yet released the table of contents, but I can tell you who:

Which I think you'll agree is a pretty great lineup.