A For Really And Truly Ghost Ship 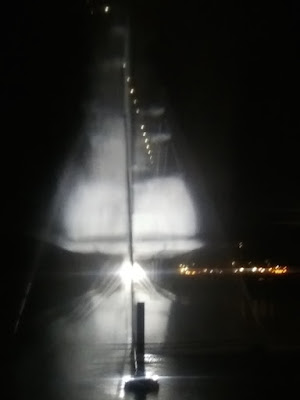 
How's this for an eerie coincidence? Right after my story "Ghost Ships" appeared in the 70th Anniversary Issue of the Magazine of Fantasy & Science Fiction, a for really and truly ghost ship appeared on the the Delaware River in Philadelphia.

I am not making this up. That's it up above.

And here's the city's explanation.

Inspired by the nuanced and complex history of the Delaware River in the 1700s, Biangle Studio created the site speciﬁc, three-dimensional light and water-based public art installation Ghost Ship. The 18th-century ship appears on the Philadelphia Waterfront as Ghost Ship for the month of October to shine a light on the shared history of the Delaware River, and reﬂect on its role in shaping Philadelphia today.

Which, if you read carefully, you will discover means that it's over. They've turned off the pumps throwing water into the air and  the lights projecting onto the droplets. Like all ghost sightings it's ephemeral... seen and then over.

But beautiful. It lingers.

A good issue of a fiction magazine is like an enhanced anthology. There's a book's worth of short fiction, and a selection of reviews and non-fiction to boot.  One of the best anthologies of he year was F&SF's 70th Anniversary Issue, which has just gone off the stands.

Here's the table of conetnts:

“Little Inn on the Jianghu” by Y.M. Pang
“Under the Hill” by Maureen McHugh
“Madness Afoot” by Amanda Hollander
“The Light on Eldoreth” by Nick Wolven
“Booksavr” by Ken Liu
“The Wrong Badger” by Esther Friesner
“Ghost Ships” by Michael Swanwick
“Homecoming” by Gardner Dozois

This Is How You Lose the Time War by Amal El-Mohtar and Max Gladstone
Radicalized by Cory Doctorow
Becoming Superman: My Journey from Poverty to Hollywood by J. Michael Straczynski
The Golden Age of Science Fiction by John Wade
Dracopedia Field Guide by William O’Connor
Best Game Ever by R. R. Angell

Books by James Sallis
The Water Cure by Sophie Mackintosh
Films: Love Death + Some Regression by Karin Lowachee
Science: Net Up or Net Down? by Jerry Oltion
Plumage from Pegasus: A Giraffe Yoked to an Ox: A Review of Flora Columbia: Goddess of a New Age by Paul Di Filippo
Curiosities: Science Fiction: Complete with Everything: Aliens, Giant Ants, Space Cadets, Robots, and One Plucky Girl by No-Frills Entertainment (1981) by Thomas Kaufsek

The issue has vanished from the stands like the ghost ships in my story. But you can buy individual issues from the F&SF website. Or, if you're the kind of person who likes to throw an Ipod loaded with their entire library into their carry-on bag just before making a spontaneous trip to Katmandu, from Weightless Books.

I'm on the road again. I'll post my adventures, if I have any, from the wilds of Michigan. 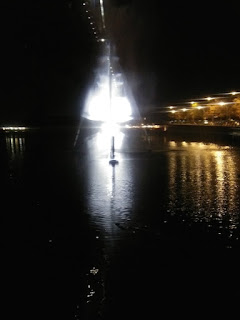