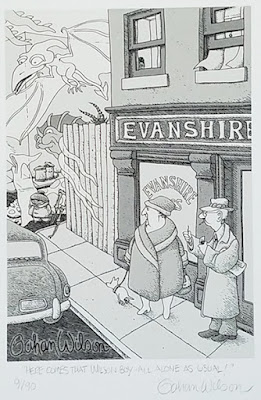 By now you've heard the sad news. Gahan Wilson, master of the macabre cartoon, is with us no more. I only met the man once but the loss is very real. He brought joy to all of us with... let's say unusual senses of humor. Which, as far as I can tell from the reactions online, is pretty much everybody you'd care to know.

But you want to know about that one meeting, I'm sure.

It was at a Nebula Awards Banquet many years ago. I was sitting at the same table as Ellen Datlow, then editor of Omni, who had invited him to dine with us. He seemed subdued, like he was coming down with something. Or maybe he was worried about something. At any rate, he didn't sparkle.

When our meals arrived, the waiter set down a little bowl of beets beside my plate. "Oh, joy," I said dolorously. "Beets."

"I love them!" Marianne, who was sitting to my left, said.

"You can have mine," I replied, dumping them on her plate.

Gahan Wilson, who was sitting to the other side of her, suddenly perked right up and dumped his bowl of beets onto Marianne's plate, atop mine. And in flurry of flying beets, so did everyone else at the table.

Leaving Marianne staring down at an enormous red mountain of beets, dwarfing her meal proper.

And that's all the story there is. It's a small one, but mine own. I met Gahan Wilson once, and he brought joy to everyone at the table.

Except, possibly, until later, Marianne.


Above: There Goes That Wilson Boy All Alone As Usual! A signed and numbered serigraph of this cartoon is available at The Gahan Wilson Virtual Museum. You can buy it here.


Posted by Michael Swanwick at 2:57 PM