Is There Something About Me Irish? 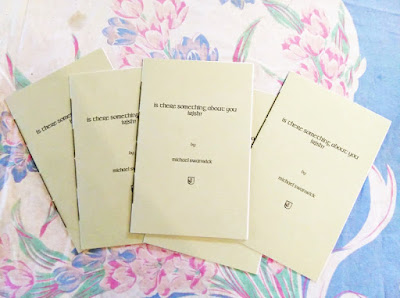 You wouldn't know it to look at my name, but I'm Irish to the bone.  Or, rather, American Irish. There's a difference. That fact has been one of the great shapers of my personality.

To mark my third visit to Ireland, and so I'd have something to give away while at the Dublin Worldcon, I wrote six flash essays, all autobiographical, on that condition. Three are set in Ireland and three in the States. Marianne took these essays and made them into a chapbook, titled Is There Something About You Irish? To understand the title, I'm afraid you'll just have to read the chapbook.

As is usual with Marianne Porter's Dragonstairs Press, the chapbooks are lovingly made, hand-sewn, and seriously underpriced. They are signed and numbered in an edition of 60, of which 36 are available for sale. Eleven dollars domestic, twelve dollars overseas, postage included.

You can find the Dragonstairs  Press site here.

Unusually for Marianne, there are two other publications yet available, though in small numbers. You can find them directly below the latest chapbook. Then you can wander down below them to see everything  else that Dragonstairs has ever placed on sale, all of which have sold out.

For the two weeks I was in Ireland, I managed perhaps one blogpost. I apologize for that. Partly it was that I was busy. But mostly it was electronic technology and me... we just don't understand each other very well, I'm afraid.

But I'm home where everything is familiar and back on track. More blogposts on a more regular schedule are forthcoming.

Really. I mean it this time.