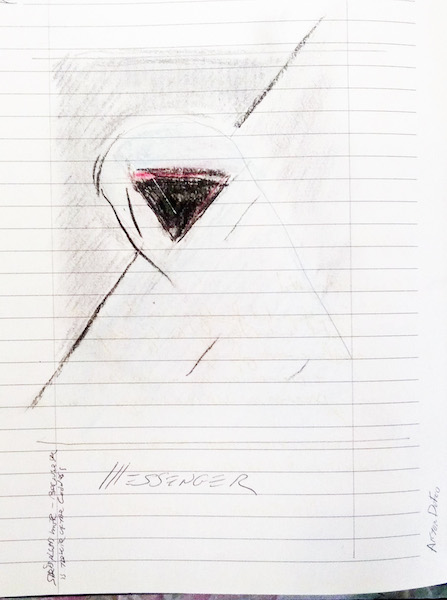 She is always mute because she is the voice of the Goddess.

As I never tire of boasting, the mere I have bubbling away on my laptop, the less I have to talk about. Today is a perfect example. I'm currently working on an interview and five introductions for projects I'm genuinely excited about. But I cannot yet talk about any of them.

Instead, I offer a page from my Prose Notebooks for The Iron Dragon's Mother. These are not the same as the Image Book. They're filled with my scribblings as I was writing the novel, many plot diagrams, workings-out of locales and the like. I'll be sharing a sampling of them in the coming month or so.

Today's page is a rarity for me: a copy of someone else's work. The original is a painting by Jay DeFeo, a near-great artist who nearly destroyed her career by working obsessively on an enormous painting titled  The Rose. You can look it up online but that's no substitute for standing in its presence. For one thing, it's ten and a half feet high. Also, it's massive.  There are literally hundreds of pounds of paint on it, to the degree that it's more like a bas-relief than a flat painting. It has an astonishing presence. You could look at it for hours.

And eventually, you'll come to the conclusion that it's great but that it could be greater. That if DeFeo had changed it just a smidge it would be something even more wonderful.=. DeFeo came to this conclusion herself, which is why she spent years obsessively on the one single painting. It almost stopped her dead.

There's much more to her story and I encourage you to learn it.

Back to the Prose Notebooks, though. The sketch above is a crude copy of one of DeFeo's later (and considerably smaller) paintings It hit me hard when I saw it. This, I thought, is what the Voice of God looks like. And since so much of my work is about the Silence of God, it seemed inevitable that she would have a place in the novel.

The messenger never makes an overt appearance in The Iron Dragon's Mother. But she's never very far away.