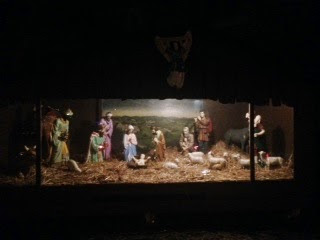 This year's Christmas chores have been tumbling one on top of another, so I'm running a little late today. Nevertheless, it's time to present my annual re-telling of something that really did happen, exactly as I tell it here. This traditional Christmas tale I call...

The Parable of the Creche
When first I came to Roxborough, a third of a century ago, the creche was already a tradition of long standing.  Every year it appeared in Gorgas Park during the Christmas season. It wasn't all that big -- maybe seven feet high at its tip -- and it wasn't very fancy. The figures of Joseph and Mary, the Christ child, and the animals were a couple of feet high at best, and there were sheets of Plexiglas over the front of the wooden construction to keep people from walking off with them. But there was a painted backdrop of the hills of Bethlehem at night, the floor was strewn was real straw, and it was genuinely loved.
It was a common sight to see people standing before the creche, especially at night, admiring it.  Sometimes parents brought their small children to see it for the first time and that was genuinely touching.  It provided a welcome touch of seasonality and community to the park.
Alas, Gorgas Park was publicly owned, and it was only a matter of time before somebody complained that the creche violated the principle of the separation of church and state.  When the complaint finally came, the creche was taken out of the park and put into storage.
People were upset of course. Nobody liked seeing a beloved tradition disappear.  There was a certain amount of grumbling and disgruntlement.
So the kindly people of Leverington Presbyterian Church, located just across the street from the park, stepped in. They adopted the creche and put it up on the yard in front of their church, where it could be seen and enjoyed by all.
But did this make us happy?  It did not. The creche was just not the same, located in front of a church.  It seemed lessened, in some strange way, made into a prop for the Presbyterians. You didn’t see people standing before it anymore.
I was in a local tappie shortly after the adoption and heard one of the barflies holding forth on this very subject:
"The god-damned Christians," he said, "have hijacked Christmas."

Up here in the Valley, such arrangements were called "putzes," from the German for "finery" or "jewelry." Some of these were quite elaborate, with miniature villages with miniature railroad sets. (Presumably like that railroad on which the Holy Family rode to Bethlehem.) When I was a kid, people would walk about the neighborhood to admire one another's putz, a practice called "putzing around." The term had long become applied to "kids daydreaming/goofing off," as when my mother would tell me, "Quit putzing around," something at which I excelled. I never heard the word "creche," which sounds French.

There is a "living creche" a couple miles up the river, in Bethlehem, which the Moravians put on each year. No one complains about it because it's "ethnic" and no one wants to argue with a live donkey and camel. Also, Bethlehem is The Christmas City, and an enormous Star sits atop South Mountain to light the way for tourists.