Donald Trump The Magazine of Poetry 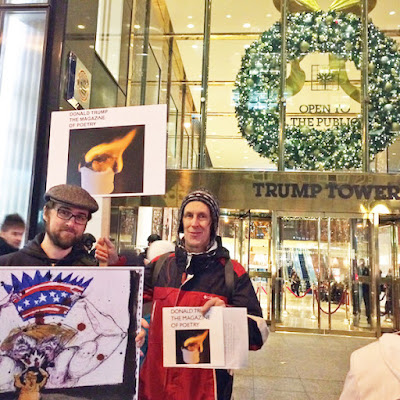 And what rough beast, its hour come round at last...
-- William Butler Yeats

Almost fifty years ago, in 1968,  Pamela Zoline and John Sladek, with help from Thomas Disch, edited a one-shot poetry zine titled Ronald Reagan The Magazine of Poetry. It holds a certain place in our cultural memory if for no other reason than its including J. G. Ballard's scabrous masterpiece, "Why I Want To Fuck Ronald Reagan."

I was offered the opportunity to contribute but, not being a poet, didn't see a place for myself in the magazine's pages. But after the fact it occurred to me that something I wrote in college would have filled the bill quite nicely. Since the original magazine was a one-shot, it seems unlikely we'll ever see a second issue of its inspired offspring.

That being the case, I present my poem in its entirety below:

Excuse me while I slit my


Collectors and patrons of poetry can find the ordering information here.


Above: Henry Wessells and accomplice celebrating the magazine's launch in New York City. Envoi is copyright 2016 by Michael Swanwick.