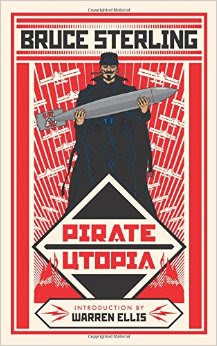 Novellas seem to be pretty popular nowadays. Tor has a strong line of them and so does Tachyon Publications. That's one of the latter's up above.

Bruce Sterling has always had a complicated relationship with science fiction. He has a particular brilliance for writing the stuff and a noted loathing for its conventions. This explains much about Pirate Utopia, which is almost not SF and yet should prove eminently satisfactory to genre readers.

The Free State of Fiume was a real thing. Fiume was a port city which was seized by troops led by the Italian poet Gabriele D'Annunzio. Very briefly, it became an attempted Futurist utopia.

The novella explores this strange phenomenon through the lens of the single worst member of the new government, exposing along the way the seductively poisonous appeal of fascism. At the end, after the inevitable has played out, Harry Houdini appears with two alt-historical pulp writers to implicate science fiction and fantasy literature in the in the whole mess.

It really is quite brilliant.

Tachyon has packaged this story with an introduction by Warren Ellis, a Cast of Characters explaining the historical figures behind the story, an afterword by Christopher Brown, an interview with Sterling himself (by Rick Klaw), and notes on the book's design by John Coulthart. Taken all together, they raise the book to the status of Event.

Coulthart's cover and illustrations must be singled out for particular praise. Based on Fortunato Depero's graphics, they capture the energy and zest of Futurist art and the dangerous appeal that the movement had. I can't think of a better marriage of image and text than here.

Oh, and the postage stamp showing a line of daggers in clenched fists? That was a real thing too.

Happy holidays, everyone! Happy Hanukah, Merry Christmas, Blissful Solstice. Whatever your holidays, may they be bright with joy.

For those of you who may be depressed this Christmas, may I suggest making time to watch THE MUPPET CHRISTMAS CAROL? It's held up very well over the years and you might get a few laughs out of it. In high school I was forced to read GREAT EXPECTATIONS without any background given us about the English social system in the early 19th Century and so found it almost impossible to comprehend. But Dickens made up for his crimes to me with A CHRISTMAS CAROL. Besides, even Raymond Chandler might find it hard to write a line better than "Darkness was cheap and Scrooge liked it."