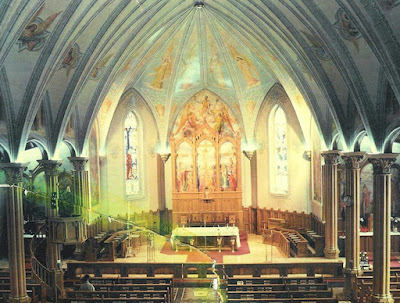 The snow fell soft and heavy that Christmas Eve of my long ago youth. The world was so silent you could hear an angel sigh. My father’s Chevrolet drove slowly and cautiously down Lafountain Street, the snow before us untouched and the snow behind bearing a single set of tire tracks, our own.

Every year I remember a little less. So I shall share this memory with you now, before it fades into oblivion, and me after it.

Christmas is a holy day of obligation. My mother, my father, and I were on our way to midnight Mass at Saint Stephen’s Church. My older sister Patty was in nursing school. Mary and Jack were home asleep. Sitting in the back seat of the car, I was acutely aware of the honor of being allowed up so late. I could tell my mother was concerned about the state of the roads, but she said nothing.

The sky was low. The houses we passed were dark. We three might have been the only people on earth. Yet as we drew closer to the church, other cars appeared in surprising number and when we arrived, the gravel lot was filling in fast. Solemnly, we entered the church.

The king of Northumbria was converted to Christianity when a missionary compared life to a sparrow which has flown out of the night through a banquet hall window to find itself briefly surrounded by light and warmth and color and music before flying out the window opposite into darkness and mystery again. Such is my memory of that Mass, all candles and incense and choir music, diminished only slightly by my worry that our car might get stuck on the way home.
Then we were outside again, our breaths white puffs of steam in the winter air. It was still snowing but during the service somebody had shoveled out the lot and the entrance to the street. The road, however, was choked with snow and looked more dangerous than ever. We got into the car and made our way, sliding slightly, to the street.

Just as we were about to turn, a car came fishtailing down the hill and lurched to a sudden stop before us. The driver leaned out his open window, face red and puffy, to drunkenly shout, “Merry Christmas!”

My father rolled down his window and, smiling, called back, “Merry Christmas to you too, sir!”
That was my father.

That was my childhood as well, in all its ordinary glory. That was Christmas in Old Winooski in a time that is fading slowly, inexorably, into the relentless snows of the past, growing dimmer and harder to see with each passing year. I hope that your every holiday, whatever you celebrate will, now and always, be every bit as happy, every bit as rich, and every bit as blessed too.

A nice, semi-Updikian celebration of the quotidian. I'd read a mainstream novel by you, sir, if you ever wrote one.

In the meantime, Merry Festivus, and long may you write before fading into oblivion-.