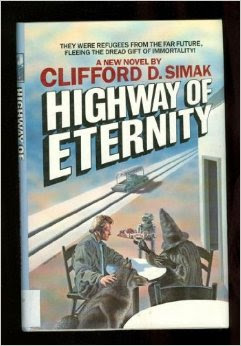 Important writer though he was, Clifford Simak's novels grew looser and more shambolic as he aged. Highway of Eternity, a book I read recently because it was at hand and I was too sick for anything more serious, is a good example of this. A family of fugitives is hiding in a bubble of time in the Thirteenth Century. They are refugees from One Million Years in the Future. And their names...?

They are David, Emma, Horace, Timothy and Enid. The Evans family. Surprisingly little changes in the next million years, apparently

The plot is a rambling, arbitrary mess. Multiple suspensions of disbelief are required to keep it going. The implications of the enabling technologies are pretty much ignored. Stucturally, Highway of Eternity is a hot mess.

And yet... There are two good bits in it.  One comes after Boone, the protagonist, kills an assassin-bot in pre-human North America. As he is surveying the wreckage:

The monster spoke inside his mind.
Mercy, it said.
"The hell with you," said Boone, speaking before astonishment could dry up his speech.
Don't leave me here, the monster pleaded. Not in this wilderness. I did no more than my job. I am a simple robot. I have no basic evil in me.


And later another character, Corcoran, in the far future sees something unexpected:


There was a strangeness about the ridge top -- a faint haziness (...) He slowed his walking, came to a halt, and stood staring up at the haziness that was beginning to assume the form of a gigantic, circular, free-standing staircase winding up the sky.
Then he saw that he was wrong. The staircase was not free-standing; it wound around a massive tree trunk. And the tree -- good God, the tree! The haziness was going away and he could see it more clearly now. The tree thrust upward from the ridge top, soaring far into the sky, not topping out, but continuing upward as far as he could see, the staircase winding round it, going up and up until the tree trunk and the staircase became one thin pencil line, then vanished in the blue.


Both those moments evoke that most hoary of science fiction virtues -- the sense of wonder. A little of which can make up for a great deal of what otherwise was a terrible waste of time.

I learned sometime after writing the above that Highway of Eternity is available as n e-book from Open Road Media, who also make available a great many other Simak books in e-form.

So I was wrong, and glad to be proved so.

Nice. I read most of Simak's output and there was a time in which he was favorite writer, at about age 14.

I haven't returned to much of it. I reread City, and I read The Big Front Yard out loud to my kids, a few years back when they held still for such things.

I think the sense of wonder moments occur when a text wakes up and does stuff; even when writing derivative formulaic crap to some perceived market, there are moments of transcendence. Often they take the form of loose ends, which, I think, in the days of manual typewriters, were often left in.

I re-read THE WAY STATION recently. It held up pretty well. It only worked in that post-war time frame though. Updating it would make it a lot more complex.