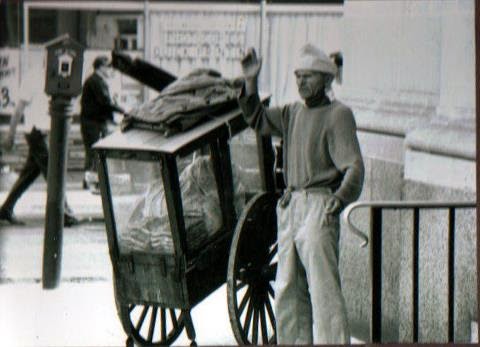 When I first moved to Roxborough over a third of a century ago, the Pretzel Man was a local institution.  He sold soft pretzels from his cart on Ridge Avenue.  Nobody knew his name, but he was commonly called Pretzel Pete or the Mad Russian or simply the Pretzel Man.

There was clearly something off about the Pretzel Man.  Sometimes he shouted angry speeches in a language not spoken locally.  He was pretty clearly a loner.  All anybody knew of him was that he had showed up one day in 1962 and never went away. Also that he was homeless. Sometimes he slept in a tent in somebody's backyard.  Other times in somebody's garage or shed. Long after, the garage owners said they would invite him in on Sundays to watch football.

Late in his life, some kids busted up his pretzel cart just for the hell of it, and he took to selling pretzels out of a shopping cart.  His speeches became more common.  I vividly remember him standing at the corner, pumping his fist as he rhythmically chanted:

But he was always clean, and he was never violent.  And there was a sadness to the man.  You knew that he had suffered in his time.

This last was established as fact when a local Catholic church brought in a priest who could speak Russian to see if there was any way he would allow them to help him.  The conversation did not begin well, for when he heard the Russian language, he became extremely angry.  But eventually, the priest was able to calm him down, and got a rough sketch of his life.

The Pretzel Man's name was Choban Hoxha.  He was an Albanian Moslem who was captured by the Fascists in WWII and placed in a prison camp. At the end of the war, he was captured by the Communists who took him to a labor camp in Russia.  Somehow, he managed to escape, made his way to Istanbul, and from there (again, somehow) found passage to America. In the early 1960s, he came to Roxborough and there he stayed for the rest of his life.

When Hoxha died in 1995, Turner Funeral Home gave him a simple burial, at their own expense, just inside the gates of Leverington Cemetery. Somebody started a fund and collected enough quarters and dollars for a simple stone to place over his grave.  It reads:

Between the two dates is the image of a pretzel.

Nobody knew how to help a man who wanted no help and apparently couldn't even speak English. But what little could be done, the community did.

You can read a Daily News article about him here.

Except for one thing.  When my son Sean was small, we walked by the Pretzel Man's cart frequently, and we were always careful to say hello.  One day, he said hello back to us.  After that, we would often stop and chat for a bit.  So we knew, as apparently no one else did, that he spoke fluent English.

Other than Marianne, Sean and I told no one.  Choban Hoxha was a mysterious man who led a difficult life. The least we could do was respect his desire for privacy.

If this image is Pretzel Pete, please share it and the story with the Faecbook page, Old Images of Philadelphia.

Whence did he get his pretzels?--Mario R.

Maureen, that's where I found the photo.

Mario, from a bakery down the hill in Strawberry Mansion.

Fascinating stuff, Michael....thank you. I remember Pete from early 1962. I went to the now closed Joel Cook school on Manayunk Avenue then. I vividly remember him standing in front of the supermarket ( It wasn't Pathmark in 1962...It was an A & P ) at Green and Ridge.). I remember seeing him down under the Henry Avenue Bridge in the early 1970's....I thought that's where he slept at the time. Oh well. Thanks very much for the info on him. Remember his chant..."Hot-a pretzel...cold-a mustard !!"

Good story. I was looking around the internet from my home in Colorado and now, 20 years since moving out of Roxborough, finally learned the full story of the pretzel man. I was told he was "shell shocked" as a kid. That was all I ever knew. Bought a couple pretzels from him over the years. That is the corner where the bank was, I lived about a block from there going down Green Lane. I believe it was A&P, Pickwell, SaveWay, and then a Dollar Store next to the bank there.