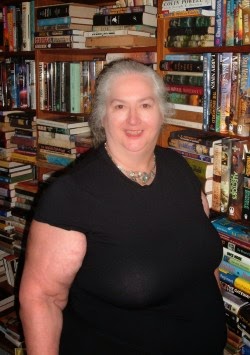 In Robert Altman's film of A Prairie Home Companion, Garrison Keillor refuses to make a public announcement of the death of one of the radio show's regulars. "At my age," he says, "if I start acknowledging every death of a friend, the show will contain nothing else." (That's a paraphrase; I don't have it memorized.)

That's kind of how I feel at times nowadays. But I would be remiss if I didn't acknowledge the passing of Peggy Rae Sapienza last Sunday.  Peggy Rae was a second-generation fan, a con-goer from age 12, and one of those people who do the hard work of running conventions for many decades.

Peggy Rae was always kind to me. From what I could see, she was kind to everyone. Once, when I had a high-speed blowout on the way to Balticon, she and her first husband, Bob Pavlat, got my car towed, found a Jewish auto mechanic who was open on Easter weekend, and got me home Sunday safe and on schedule. That went far beyond anything that could be expected from people who were also involved in running the convention.

Somebody said that she exemplified all that was best in fandom.  I think that's true.

Now she's gone and there's nothing I can do to thank her for all she's done for me.  Except to mention that her father, Jack McKnight, was not only one of the founding fathers of Philadelphia fandom but also the man who machined the very first Hugo trophies in his garage machine shop. She always liked it when somebody reminded the world of how cool her Dad was.

Rest in peace, Peggy Rae. Thanks for helping me get home.


Posted by Michael Swanwick at 7:48 AM

Thank you, Michael, mom loved fandom so much, and would love that you shared those stories.