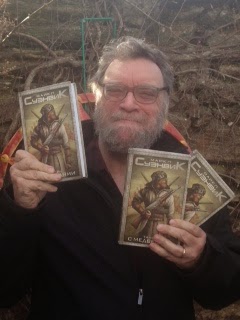 If you've never been to Russia, you can't imagine how happy this makes me.  Russia is a wonderful-awful place, terrifying and beautiful, and it has owned a piece of my heart ever since the moment I first set foot on it.

Now Eksmo has published Dancing With Bears in Russian translation.  This is the culmination of the first cycle of the travels of Post-Utopian con men Darger and Surplus.  They met in "The Dog Said Bow-Wow," accidentally set fire to London, and then set off for Moscow to run their biggest scam ever.  Being infinitely distractible, however, they bounced around Europe for several years having adventures (only a few of which I've recorded so far), but always headed for Moscow.

And now, at last, they have arrived.


Oh, and that cryptic title above...?

I am not the only one to comment on how to an American my last name translated into Russian looks a lot like Cyberpunk.  Back in the late Eighties or early Nineties, in fact, I invented a character, a precocious teenaged Soviet hacker, who went by the handle Misha Cyberpunk.  Alas, though I could imagine him clearly enough, the story about him never came fully into focus.  The age of the heroic hacker came and went and even if I came up with a satisfying plot now, the story would be a period piece.  So "Red Star" will never be written.

But good old Misha never quite got put back in the box. So every time I'm published in Russia, I think of him.