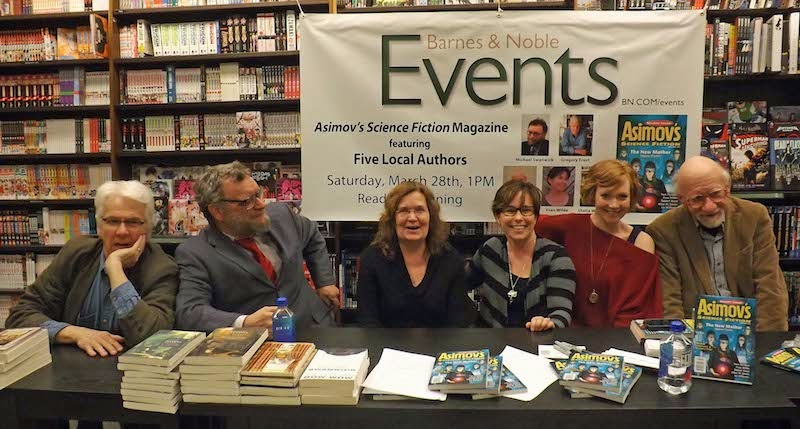 Sometimes everything comes together.  You walk out on stage, you hit your mark, and the audience loves you.  That's how Saturday's event celebrating the "Philadelphia Issue" of Asimov's Science Fiction went.

A good-sized crowd turned up, and a distinguished one. How distinguished? There were more writers in the audience than at the table, along with fans, academics, and folks of serious accomplishment in unrelated fields.  Everybody on the panel was witty and nobody hogged the microphone.  Afterward, enough copies of the magazine were sold to make the Barnes & Noble people very happy indeed.

That's us up above.  Left to right: Gregory Frost, Your Humble Narrator, Sheila Williams, Fran Wilde, Emily Hockaday, and Tom Purdom.  For those who don't already have the April/May 2015 Asimov's, it contains Fran's “How to Walk Through Historic Graveyards in the Post-Digital Age,” Tom's "Day Job," and a wonderfully light-hearted romp penned by Greg and myself, titled "Lock Up Your Chickens and Daughters -- H'ard and Andy Are Come to Town!"

Believe it or not, we even had one of the protagonists of a story present.  Andy Duncan, who is one half of the inspirations for my collaboration with Greg (the other is Howard Waldrop), spent most of an hour with a slightly bemused expression as he autographed our story.

If you've been paying attention, that's seven autographs obtainable (for those who quite sensibly got the editor and editorial assistant to sign their issues) for the price of a single magazine. Which then became quite a neat little snapshot of a moment of literary history, a gathering of individuals which will never be recreated in the same configuration.