The Fragmented Masterpiece of Isaac Babel 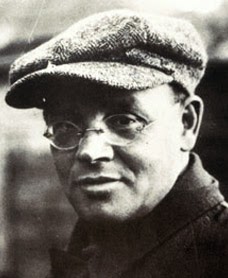 Over on Facebook, one of my Ukrainian friends asked me why I named my blog Flogging Babel, and wondered whether I'd ever read the works of the great Isaac Babel.

The blog's name came about because I started it in part to promote what was then my new novel, The Dragons of Babel.  Coming from a generation which thought self-promotion something of a character flaw, I chose the word "flogging" as a gentle bit of self-mockery.  In retrospect, I probably should have thought of how odd the title would look a few books down the road.

As for Isaac Babel... Oh, yes.  I once brought a copy of The Red Cavalry Stories with me to Russia, in fact, as my reading material.  If you haven't read the stories yet, I strongly urge them upon you.  They are an intellectual adventure.  But not a light one.  Here, chopped from a longer essay about fix-ups and very lightly rewritten to make it a stand-alone essay, is my take on it.

Isaac Babel’s most famous work is The Red Cavalry Stories, ostensibly nothing more than a collection of stories with a common setting and recurrent characters – the Soviet invasion of Poland in 1920 and the soldiers and civilians caught up in it.  By any measure, it is a major work of literature, terrifying, moving, and a judgment on the human condition.  Babel was involved in the war as a propaganda officer, and spent much of his time trying to prevent Cossacks from executing their prisoners.  From the atrocities, rapes, and casual murders he witnessed, he created something of enormous depth.

Yet not all of the stories are impressive as stories.  Some are vignettes or even anecdotes.  They grow in cumulative power as the book is read, events recur, people show themselves in different aspects.  This is an effect that relies heavily on the stories being read in the order presented.  (Babel wrote more Red Cavalry stories after the book’s publication; when they are included, they are grouped separately, as afterthoughts, so as not to interrupt the original structure.)  Read randomly, they would still impress and terrify.  But the work as whole would be greatly diminished.

What makes this particularly interesting is that the stories themselves are seemingly presented in only the loosest order.  A story begins to tell one tale and then is interrupted and goes haring off after a totally different one.  Narratives begun in one story are dropped abruptly, only to be picked up again later in the book.  Events appear out of chronological order.  Characters disappear and then reappear, sometimes greatly altered and other times heartbreakingly unchanged.  Some never turn up again, and the reader may or may not learn what becomes of them.  The narrative intelligence darts from memory to memory, never lingering long, fleeing from one to another like a sleeping man trying to dream his way out of a nightmare.

Taken as a whole, The Red Cavalry Stories looks like nothing so much as the fragments of a novel which cannot be written.

There is a scene in Federico Fellini’s Satiricon set in a workshop where Roman artists are creating  fragmentary mosaics and statues without arms or heads.  Babel’s book can be best understood as that same artistic project taken seriously rather than as a throwaway joke. It is a novel whose continuity has been shattered by the enormities that the author witnessed.

The novel is literature’s ultimate expression of moral sense made structure, a summation and universal comprehension of the world.  So when there is no sense and can be no comprehension, it is inadequate to the task and the artist needs a new form.  Call The Red Cavalry Stories a mosaic novel if you wish or a chimera if you will.  But it is not merely a collection of short stories.

It is a work of traumatized genius.

I had (genuinely) assumed it was a pun on blogging fables. Who knew?

Even more remarkably, Ruzz, your pun never occurred to me. Not once.

I think it's brilliant. Stand up and take a bow!

Funny, that's what I thought too.

Thank you for the recommendation. I'm going through a Russian lit. phase at the moment so will add it to the list. I read Ringolevio which you recommended to people either in an interview or here a few years ago and I loved it.