A Memoir in the Form of Four Denim Jackets (Part 1) 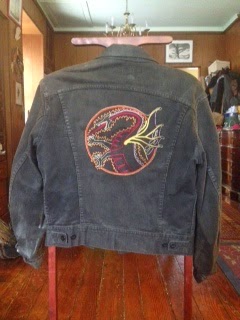 I'm never going to write an autobiography.  But while cleaning out the downstairs closet, I unearthed four denim jackets from my past.  Here's the first:

I came to Philadelphia in the winter of 1973 with fifty dollars in my pocket, a two-pack-a-day habit, and a friend who was willing to let me crash on his couch.  By the time I found a job that spring, I'd lost forty pounds. 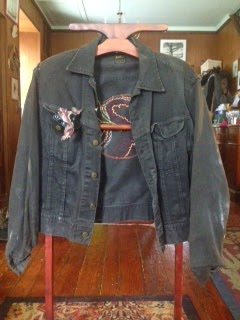 But I've written about that elsewhere.  This jacket was from slightly later, when things were getting better.  I had no beard in those day and hair down below my shoulders. I ran with a scruffy batch of art students, musicians, underachievers, and the like.  Collectively, we had a thousand shifts for getting by.  One of my friends embroidered mandalas on the backs of blue denim jackets and sold them to a boutique, where their prices were jacked sky-high.  She offered to make one for me, and I requested she embroider one of my dragons instead.  I wore black denim then because I was in my early twenties and more than a little Byronic.

I wore this jacket to my first Worldcon -- MidAmeriCon in Kansas City.

The day I put that jacket in the back of the closet, I found a small American flag on the sidewalk, picked it up, and put it in a pocket.  Back then, it would have been a bad idea to wear such a thing in public.